The western corn rootworm (Diabrotica virgifera) is an insect from the Coleoptera order , originally from Central America (Panama region) of which the territory has progressively extended through North America, up to Canada.

Measuring 5 to 6 mm, its body is uniformly bright yellow, except for the head and the elytra marked with two black stripes. Two long antenna positioned on the forehead are often folded against the body.

Females lay their eggs (an average of 1,000 per individual) at the base of corn plants between August and October. The eggs can withstand very intense cold and the larvae hatch on the ground in spring. Attracted by a substance released by corn roots, the larvae push through and attack the roots, which are almost their only diet. They generally die in the absence of this plant. After a month in the larva stage, they progress to the nymph stage and a new adult insect appears that is able to reproduce.

This insect appeared in Europe in 1992 near Belgrade airport, seemingly as a result of the airbridge organised by the Americans between the United States and Yugoslavia during the Bosnia-Herzegovina conflict. It was observed for the first time in France in 2002, near the Roissy and Orly airports, then in 2003 in Alsace and in 2005 in Picardie. 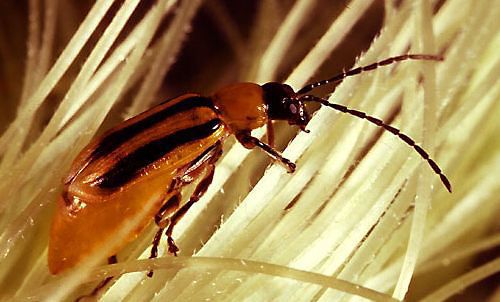