Description of the wandering albatross

Thewandering albatross is probably the sea bird with the largest wingspan in the Diomedeideae family. Its plumage is primarily white as are its wings, with the exception of the remiges, which are blackish with white spots. Its rump is white and bordered with a dark fringe. The definitive colours of its plumage are acquired over a period of about twenty or thirty years. Its long, hooked beak and webbed feet are pinkish.

Habitat of the wandering albatross

The wandering albatross is only found in the Southern Hemisphere, in the Pacific, Atlantic, Indian and Southern Oceans, between roughly the 60th and 30th degree of latitude south. Thebird is pelagic and only comes onto dry land to reproduce. It nests on the sub-Antarctic islands such as Southern Georgia, the Prince Edward and Crozet Islands, the Kerguelen islands or even Macquarie Island, which is located between Antarctica and New Zealand.

Behaviour of the wandering albatross

Outside the mating season during which it is gregarious, the wandering albatross lives alone or in small groups. Major groups only come together around trawlers. This species is an exceptional glider and can cover spectacular distances due to the lift of its wings and its ability to immobilise its wing joints to spare its muscles. It can glide continuously and can face 160 km/h winds. It is very clumsy on the ground and it stumbles and falls frequently when on its webbed feet. It is a quite poor swimmer and diver and its landing techniques are not very effective. In fact, landings regularly end in heavy falls followed by spectacular somersaults. To get an idea of the technique, if it can be called that, just watch Orville in the cartoon Bernard and Bianca!

The wandering albatross makes piercing cries when it fights another individual over food, defends its territory or sets out to win the affections of its beloved. The rest of the time it is a generally silent bird. It is a tireless traveller, able to cover long distances in relatively short periods of time. Because of its large size, the adult bird has no predators, but when its nests are left unguarded its chicks and eggs are preyed on by skua and sheathbills, as well as mammals introduced onto some of the islands. Juvenile mortality can reach 75% the first year.

Reproduction of the wandering albatross

The wandering albatross can breed for the first time at the age of seven or eight years. It may even reach the age of fifteen before pairing up for life. Nests are located on high cliffs where the wind load is significant, which helps with take-off. Take-off is at least more graceful than landing. The nest is lined with grasses, soil and dry algae and can reach a metre in diameter. The female lays a single egg which she broods alternately with the male for around 80 days. Parents swap places every two or three weeks. After the chick hatches, both parents continue to feed and protect it for a month. Then they leave it for long periods to go out to feed and feed their progeny on their return. This alternating period of absences and feeding lasts about eight months, until the fledgling is able to fly. This long reproduction period (the longest observed in birds), means the wandering albatross only nests every two years.

Diet of the wandering albatross

The wandering albatross' diet mainly consists of cephalopods, including squid, as well as fish, molluscs and crustaceans. But it does not turn its nose up at rotting carcasses or waste from boats. It only fishes on the surface, during the day and at night, and does not dive more than one metre.

Threats to the wandering albatross

Populations of wandering albatrosses are spread out over all of the oceans in the Southern hemisphere and only represent a few thousand nesting couples worldwide. The threats to this species are mainly of several types: predation by animals introduced onto the islands where the wandering albatross nests, longliners and its low reproductive capacity. A study in 2007 on Bird Island by the British Antarctic Survey, revealed that half the chicks had swallowed fish containing... hooks. 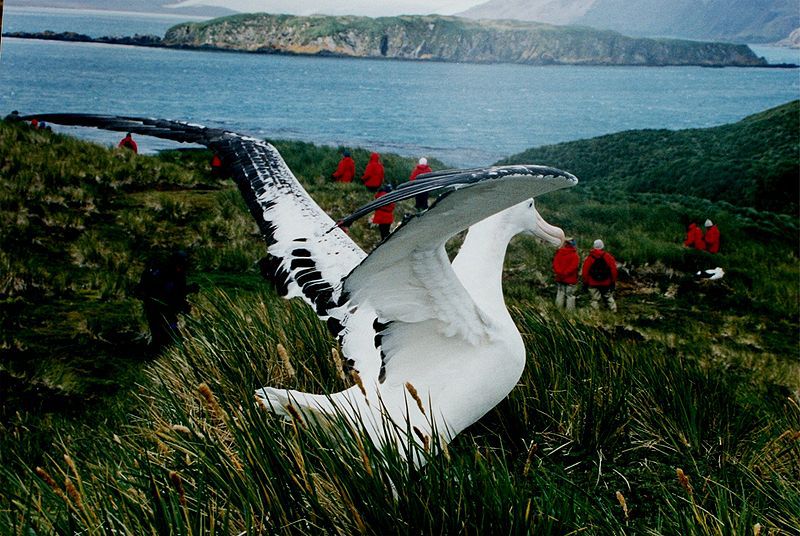