The swallowtail butterfly, also called the "old world swallowtail" is an insect in the Lepidoptera order of which the wingspan can reach 50 to 75 millimetres. The wings of an adult or imago swallowtail, which vary from pale yellow to dark yellow, are decorated with complex black patterns. The hind wings are shaped like a tail and feature a post-medial band of blue patches and two bright red eye spots, underlined in blue. Its shape is roughly triangular.

There are countless variations and subspecies of this butterfly throughout the temperate Northern hemisphere, from Europe to North Africa, Asia, Japan and North America. It lives in flowery meadows, dry or Alpine grasslands and other sunny places where its main host plants from the carrot, celery and parsley family grow, (fennel, wild carrot, dill...), up to an altitude of 1,800 metres.

The female lays her eggs individually on foodplants. Eggs hatch after a week. The larval stage lasts about a month, during which the caterpillar eats constantly to reach its final size before metamorphosis. The green larva is smooth, with black rungs and orange spots. It can grow up to 45 centimetres long.

Depending on the environment, two or three generations may be produced per year. In Alpine regions, only one generation is produced annually. The caterpillar is diurnal and active from May to July, then from August to October. When it is threatened it raises an orange gland located on the pro-thoracic segment, the osmeterium, which releases an unpleasant smell intended to keep predators at bay. During metamorphosis, the caterpillar wraps itself inside a chrysalis which it fixes using a silk girdle and a cremaster located at the tip of its abdomen. Depending on the geographical region, the nymph stage can last several weeks, or even the whole winter, during which the chrysalis hibernates.

Threats to the swallowtail

Relatively common in France, the butterfly is protected in several Central European countries (Hungary, Romania, Slovenia...) as well as in certain regions of Austria and a few German "länder". It was declared a vulnerable species in South Korea. 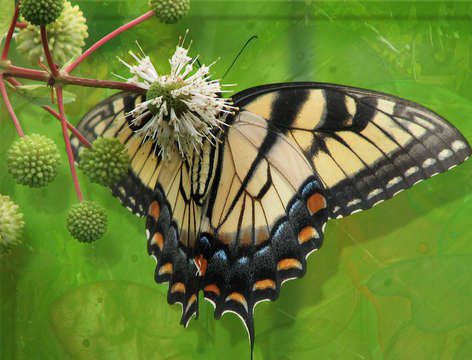