According to the French national red list the straight swift is a threatened species in France.

The straight swift is a brown diurnal butterfly commonly found at low altitudes in Asian and African countries and other islands of the Indian Ocean. In these regions its caterpillar grows on a wide range of grasses including cultivated species. On Reunion Island the species is represented by one subspecies Parnara naso biguttawhich is endemic to the island and seemingly as rare as it is poorly understood.

It is very difficult to differentiate this small, quick-flying butterfly from a similar species, Borbo borbonica commonly found on the island. Little is known about the habitat of the straight swift on Reunion Island and until recently it was believed that its caterpillar grew on the "Calumet", a type of bamboo endemic to the island that grows at an altitude of around 1,500 metres, in the Tamarin des Hauts forest. But the rare specimens observed in the past few years have all been spotted at lower altitudes...far from the Tamarin forest. Due to the lack of information the species had to be classified in the “Data deficient” category. 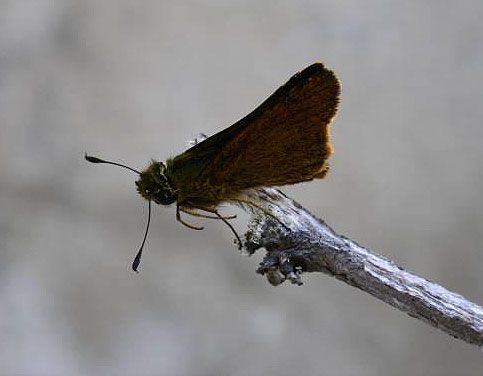