Description of the sperm whale

The sperm whale is a large toothed whale which, by its size, is the largest carnivore in the world. Its body is greyish and its head is a parallelepiped shape and represents a third of its body mass. It can weigh up to 16 tonnes. Its blowhole is located close to the end of its head and slightly to the left, which gives the animal a characteristic spray angle, unique amongst cetaceans. The sperm whale does not have a dorsal fin but a series of ridges along its back. The largest ridge looks like a triangular hump and can be mistaken for a fin. Its pectoral fins are tiny compared to the animal's size, while its tail, which is thick, powerful, triangular and split, can grow to four metres wide. Contrary to other cetaceans, its skin is not smooth but wrinkled and rough, like the skin of a prune. Its teeth are conical and can reach 20 centimetres and weigh one kilogramme.

The sperm whale is found in all of the world's oceans and seas, even in the Mediterranean, although it prefers open water over 1,000 metres deep. It is more likely to live in equatorial or tropical waters. Females and young calves stay in warm water and never go above the 50th parallels to the North and the South, while the males move towards the Arctic polar waters or Antarctica, reaching the 75th parallel. A male living on either side of the equator will never cross this line to change hemispheres. Only males seem to participate in major migrations, leaving polar areas to reunite with females for the mating season.

The sperm whale produces a wide variety of vocalisations including clicks, which are the loudest sounds produced by any animal. Although it generally hunts at depths between 300 and 1,000 metres, some of its dives can reach 3,000 to 3,500 metres deep, during which the cetacean can remain in a state of apnoea for 90 minutes. Its average speed is 8 km/h but it can reach peaks of 30 km/h. The animal is able to adapt in several ways in order to manage the pressure when it dives deep into the sea. Between two dives, it returns to the water surface for about 8 minutes to breathe. The spray projected by its blowhole can reach 15 metres high and tilts towards the front left, at an angle of about 45°.

The sperm whale is gregarious and forms " pods", or groups of different sizes, depending on the sex. Females are philopatric and live in groups with their calves and young males. These groups may include between twenty and forty individuals. Young males over the age of 4 generally leave these "pods" to join groups of sperm whales of their age. Young whales and females are particularly vulnerable to attacks by predators, which are mainly killer whales. Killer whales generally tend to isolate a young animal, but the males in a group defend the young animal using a daisy formation, placing the potential victim in the centre. This is the same technique used to protect an injured whale, which actually makes it easier for whalers to hunt the sperm whale. In fact, all whalers have to do is injure one sperm whale for the entire troupe to surface and try to help it. And the massacre can begin...

Although they produce a wide range of vocalisations, sperm whales cannot compete with the melodious songs of the humpback whale. Sperm whales produce sequences or beams of clicks, which can travel over several kilometres. Each group of sperm whales uses its own sounds to exchange information or to find prey. The large sperm whale has two large spermaceti organs located above the upper jaw and protected on top by a thick layer of fat. Most likely, in addition to a sexual function, as they are used when males argue over females, these organs are used to facilitate floatability and deep dives. These two large spermaceti organs form a sort of melon, which may facilitate echolocation, be might used as a ramming tool when fighting a rival or...be used to sink a ship.

The sperm whale is at the top of the food chain in the world's oceans and seas, and plays a major role in the equilibrium of the marine environment by limiting populations of squid and octopus, which have few predators.

Between January and June, the males engage in violent fights to conquer females. At the end of gestation, which varies between fourteen and sixteen months, the female gives birth to a single calf, which already measures 4 metres long and weighs one tonne. The nursing period lasts from nineteen to forty two months, but calves may suckle for a dozen years, sometimes with other females than their natural mother. An interval of three to six years may pass before a female reproduces again. The mother's milk is fifteen times fattier than cow's milk, and young whales take seven to eight years to double their length. Females reach sexual maturity between 7 and 13 years, while males must wait until eighteen years. Males can only mate when they have reached their adult size. In other words, when they are about 50 years old.

Diet of the sperm whale

The sperm whale spends most of its time looking for food, which it usually finds at a depth of between 300 and 800 metres, although it can find food at over 2,000 metres in some cases. The cetacean feeds on cephalopods, such as giant squid and octopus, as well as fish that live in the ocean depths such as rays or pinnipeds. Sperm whales also eat benthic fish or even sharks. It is not rare to see giant sperm whales with the skin is scarred with sucker scars (large disc-shaped marks) from titanic fights with giant squid, of which the size defies imagination. The two largest species of squid are Architheutis dux (giant squid) and Mesonychotheutis hamiltoni (colossal squid) of which the sizes are estimated to be around 18 to 25 metres for the former, and over 25 metres for the latter. The largest circular scar found on the skin of a sperm whale measured 45 centimetres in diameter, which leads to assume that the assailant must have measured over 60 metres.

Threats to the sperm whale

Commercial hunting, which began in the 18th century, has largely contributed to the decline of sperm whale populations. In fact, spermaceti and the oil extracted from the fat of the sperm whale were used in a variety of flourishing markets: candles, soaps, cosmetics, motor oil or lamp oil, pencils, leather waterproofer, the perfume sector and even production of nitroglycerine... Even though the International Whale Commission proclaimed its full protection in 1985, traditional hunts continue along the Azores and Japan.

Populations of sperm whales have not been accurately evaluated, as it is difficult to count them. Due to the long periods they spend in apnoea, sperm whales can cross long distances before re-emerging. It is therefore difficult to monitor them. Scientists estimate that about 67% of the initial number of sperm whales has been lost and that in 1996, only 360,000 remained. Nothing is known about the current population, but the decrease in numbers has led to its classification in the vulnerable category. The animal is protected by nearly all countries and commercial hunting has practically been eliminated. But Japan continues to find ways to get around the moratorium and hunts ten large sperm whales per year. 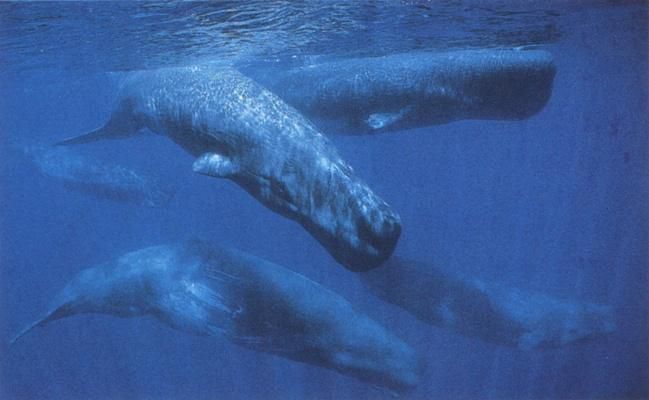