Description of the spectacled bear

The spectacled bear, which gets its name from the light patches surrounding its eyes, is of a modest size and easily passes unnoticed. The patches can also be found on its cheeks, muzzle or throat. Its coat is generally of dark, brown or black, and its fur is long. It has long curved claws that help it to climb trees.

Habitat of the spectacled bear

This is the only bear found in South America. A close cousin of the giant panda, it lives in the high-altitude forests of the Andes Cordillera from Argentina to Panama.

Behaviour of the spectacled bear

The plantigrade is crepuscular and nocturnal. Although it comes down to the ground to drink or defecate, it prefers to stay in the treetops as it is a skilled climber. In the treetops it builds its nest of branches and looks for food. It can spend several days in the same tree without coming down to the ground. The spectacled bear does not hibernate.

Reproduction of the spectacled bear

The animal's habits have not been studied in the natural environment, therefore its reproductive process is not very well understood. It is known that mating takes place from April to June and that the young are born about seven months later. Females reach sexual maturity at around four years of age.

Diet of the spectacled bear

The animal's diet is mostly vegetarian. It feeds on fruit, berries, different plants, buds and small mammals. As its territory, composed of rainforests, shrinks every day due to intensive farming, the spectacled bear struggles to find its regular food. It is therefore constrained to resort to sugar cane and corn...

Threats to the spectacled bear

The destruction of its original habitat - primary forests - for farming, hunting for meat and traditional medicine have drastically reduced the population of spectacled bears. Surveys made in 2007 suggest that there are only 2,000 individuals left on the entire South American continent... However, the bear plays an important ecological role as it contributes to the dispersion of seeds that it ingests, thus playing a part in forest regeneration. 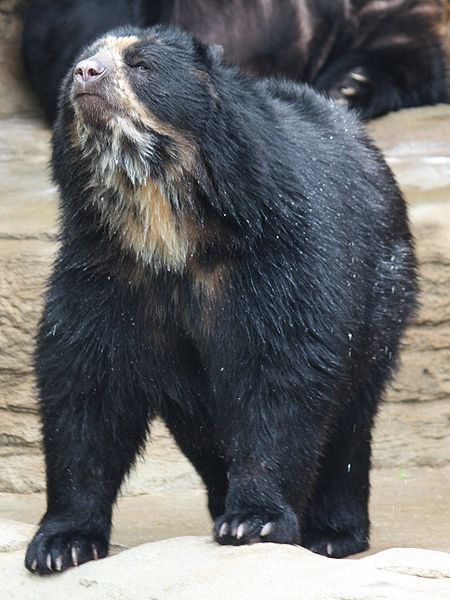