The speckled wood is a unique species, especially due to the behaviour of the male! In fact, the male is territorial. Living in wooded areas the male stations in a patch of light and patiently waits for a female to venture onto its territory. If another male ventures onto its territory the speckled wood will chase it away. Butterfly enthusiasts can easily spot males in woods and forest edges as they regularly patrol their patches of sunlight.

This butterfly is very widespread and very abundant in Europe and in France at altitudes of up to 1,500 metres. Number of generations per year: 2 to 3.

Appearance: the upper sides of the wings have a brown base spotted with many tawny patches. The forewings have a black eyespot with a white pupil positioned towards the apex. A series of black spots with a white pupil form an arc along the top of the hindwing. The patches are the main distinctive marks. The male is differentiated from the female by a fuzzy brown stripe on the top of the forewing. The underside of the forewings has patterns similar to those on the top, only duller and crossed with irregular stripes.

Green, spherical and smooth, the eggs are laid one by one on the leaves of the host plant.

Appearance: green with horizontal white and dark green stripes, it has a fork-shaped appendage on its back.

Pale green, it hangs head down, using a hooked appendage: the cremaster.

This species can be mistaken for the wall brown which has an extra orange stripe on the top of the hindwing. Furthermore, the speckled wood has more small orange patches on the top of its forewings. 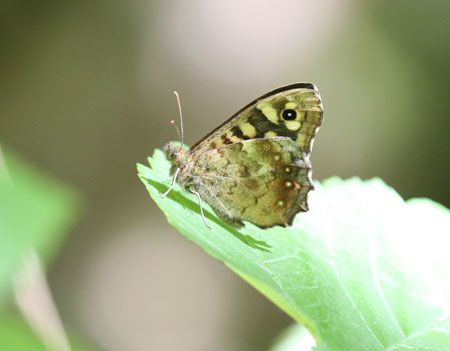