The solenodon is a forgotten witness to the last 100 million years which apparently owes its survival to its insularity! Indeed, these nocturnal insectivores facing extinction are only found in Cuba and on the island of Hispaniola. They were believed to be extinct in 1870 until a few individuals were found in 1974-1975…

Solenodons can emit ultrasounds (31 kHz for a few milliseconds) for navigation, it has hollow incisors (the word " solenodon" comes from Greek and means " grooved tooth"), which it uses to inject a powerful venom.

This family includes a single genus Solenodon and three species:

The solenodon is one of the rare venomousmammals. Its venom gland is found above its front teeth. Note that shrew saliva contains venom, but the shrew has no independent venom glands or hollow incisors for inoculation (see below).

How to identify a solenodon?

Solenodons measure between 70-80 centimetres. Their weight varies between 700 g and 1 kg maximum. They have a long, bare and scaly tail, small eyes and rough fur that ranges from dark brown to black. Their muzzle is strengthened by a bone, the proboscidean bone. They live in forests and bushy areas.

The female's two teats are located very far back on the animal. The female generally gives birth to 2 young who remain in the nest for a long time, several months, which is very unusual for insectivores. The reproduction rate of this animal is quite low.

Nocturnal, solitary and terrestrial, they feed essentially on insects and spiders by sifting through the dense and humid forest floor with their muzzle and their paws. They kill their prey by injecting it with venom. They have a good sense of smell but also a good sense of touch and hearing. On the other hand, their vision is not very good.

They are the prey of the mongoose (Herpestes auropunctatus), introduced to hunt snakes and rats as well as other predators, such as cats (another species introduced by man...). 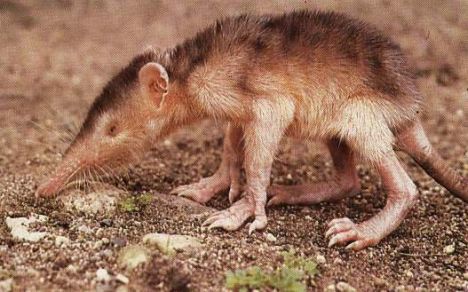