Description of the sloth bear

The sloth bear, which is also known as the labiated bear, is small and has a long and dishevelled coat marked with a white crescent on its chest. It can be differentiated from its cousins by the narrowness of its muzzle the end of which is grey or white, and by the length of its lips.

Habitat of the sloth bear

The plantigrade is adapted to the tropical forest regions of the Indian subcontinent from the foothills of the Himalayas to Sri Lanka. Its territory does not overlap that of the Asian black bear, which is more of a mountain-dweller.

Behaviour of the sloth bear

The sloth bear moves about discretely but can, conversely, be heard from very far away when it feeds. Its long lips formed to seize insects, its long tongue and the absence of upper incisors allow it to suck up insects. But the sound produced by this suction is extremely noisy and not very gracious. Using its long, strongly curved claws it can hang from the branches of trees like a three-toed sloth. This is why it is called the "sloth bear".

Rudyard Kipling was inspired by the sloth bear for the character Baloo in his famous work The Jungle Book. The plantigrade does not hibernate but does considerably reduce its activity during the monsoon season. Its bad sense of hearing gives it a reputation for ferocity. In fact it can be extremely dangerous when it is surprised. Many people have been fatally injured by the animal, which believed it was threatened when it did not hear them approach.

Reproduction of the sloth bear

The bear's reproductive behaviour is not very well understood. There is no truly defined rutting season. Gestation lasts for about seven months. The female looks for a lair before giving birth. Cubs are born blind and go out for the first time after four or five weeks. The sloth bear reaches sexual maturity after three years.

Diet of the sloth bear

The plantigrade essentially feeds on fruit, bird eggs, honey, insects and buds, but does not turn its nose up at a little meat from time to time, small mammals or rotting carcases.

Threats to the sloth bear

Like many other species the sloth bear suffers from the disappearance of its forest environment. Its areas of refuge shrink every day and are becoming increasingly rare. Since 1990, when the species was classified as vulnerable, the population of all the species combined has decreased by 40%. Only a few hundred individuals of the species found in Sri Lanka remain. 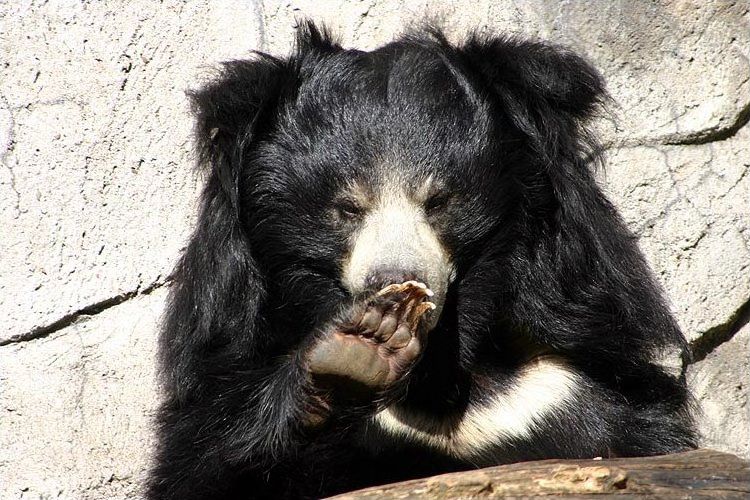