In silk-producing caterpillars the Bombyx mori, or mulberry silkworm, species gives the most beautiful and valued products.

Originally from Southern China, the silkworm has been bred since 2,700 B.C.. Eggs were imported to India, Persia, various parts of Asia, and only appeared in Constantinople in the 6th century; then silkworms were bred in Greece, Arabia, Spain, Italy and finally France in the 13th century. Lyon began to produce silk around 1450. Silkworm cultivation took off in Touraine from the 16th to the 18th century.

Silk production through the centuries

Troglodite residences have a big advantage: the underground cellars stay at a constant temperature (between 12 and 14 °C) year-round, a godsend for themulberry Bombyx which does not tolerate temperature variations! But in the late 19th century the economic crisis, followed by silkworm disease, brought the Touraine silkworm industry to its knees: the silk industry then became obsolete. One can still see the superb underground silk production facilities called "magnaneries" in the Château de Brézé near Saumur (49, Brézé) for example.

The cocooneries, small cavities carved into the rock, housed the worms when they attached themselves to the heather branches. Wormers, the women who raised the silkworms, placed a broom of heather in these cavities, where the "magnans" (silkworms) made their cocoons...Then, under Henry 4th, the mulberry tree began to be grown in the south and centre of France.

The animal gradually changed as it was domesticated, becoming incapable of flying and feeding without the help of man. This moth no longer exists in the wild, including in China, where it originally came from.

The "silkworm" is a caterpillar with a special biological specificity: diapause, a pause in egg development, 4-5 days after fertilisation.

Other species produce silk:Antheroea Yama-Maî andAntheroea Pernyï of which the cocoon is three times bigger than that of the Bombyx mori; this silk is called Tussah and is used in the furniture industry.

Silkworms are farmed in France in "magnaneries", from the Provençal word "magnan", which means silkworm. There are two stages in the breeding process: egg incubation and caterpillar farming. The first period lasts 11 days during which the temperature of the incubator progressively varies from 17° to 28°. During the last 3 days many eggs hatch. Cut mulberry leaves are then placed over the caterpillars... this is the only food they eat. Thirty grammes of eggs produce about 50,000 caterpillars which produce 40 kg of fresh cocoons and eat about 1 tonne of mulberry leaves!

Farming the so-called "worms" lasts 30 - 40 days including moulting which allows the caterpillar to grow to about 40 times its original size. It is fully grown when it weighs about 5 g and measures 9 cm.

Caterpillar litter must be changed at every meal. Care must be taken not to crowd the worms.Each caterpillar must have a space three times larger than itself when resting.

When the caterpillar reaches "maturity", a process called “boisement” takes place in which the worm climbs onto branches and chooses a place to spin its cocoon. It takes 3 days to spin the cocoon, but it should not be kept more than 7 days, otherwise it loses its weight: therefore they must be sold as quickly as possible.

Cross cut of a cocoon showing the different layers of saliva constituting the cross cut (depending on the thickness) of the cocoon. Enlarged 40X. This saliva consists of 2 strands of fibroin (protein) coated in a glue called sericin which produces raw silk. © Gérard Coste, EFPG engineer

Outside of the cocoon showing major enlargement of the filamentous saliva, enlarged 3,000X. The two fibroin strands coated in sericin can be clearly seen. © Gérard Coste, EFPG engineer

The thread used to make the cocoon is formed of 2 threads of saliva secreted by the silk glands, which are welded together by the sericin: a mixture of gelatinous, waxy, resinous and colouring substances that cover the fibroin. The thread is therefore composed of two elements: 75% fibroin and 25% sericin, which is dissolved in a boiling, soapy solution. The average length of the thread is from 600 m to 1 km per cocoon and its diameter regularly decreases between the beginning and the end of the same cocoon. It takes 11 kg of fresh cocoons (3 kg dry) to produce 1 kg of silk thread...

Three days after the cocoon is made the chrysalis is formed, then 15 days later the moth.As long as the chrysalis was not killed before this transformation the moth leaves its cocoon by piercing it and it can no longer be used to spin thread...

Therefore the chrysalis must be killed by suffocating it, and then completely dried to prevent it from rotting. This is done in an oven or in a chamber. In the latter case, cocoons are placed above a hot air chamber equipped with fans.The temperature is kept at 83° during the entire operation.

But some specimens must be kept for reproduction, so some chrysalises are kept: as soon as they leave the chrysalis they mate, the female is then placed on pieces of cloth and a few moments later she begins laying eggs. The eggs stick to the cloth: this is how they are kept until the next growing cycle, in dry conditions at a temperature of 12°.

An excerpt from a report by Pierre Couble, director of the Centre for Cellular and Molecular Genetics (CNRS - University Lyon 1), Villeurbanne.

"Using transgenic silkworms is even more justified by the availability of a significant body of data on the physiology, biochemistry, genetics and genomics of this organism widely used as a model in pure research. Although there were contacts between the laboratory and the DGA, the question - central to this project - of the availability of a method for transforming the germinal line of the Bombyx was not, however, settled, and the support provided by the DGA helped resolve it. The transgenic protocol that we have developed has proven to be extremely effective and leads to a stable expression of transgenes, the genes introduced during successive generations of Bombyx.

The competition between the production of the exogenic protein and the production of silk proteins in the Bombyx can make it difficult to control the final composition of the silk fibre. Thefefore we are working to replace the expression of Bombyx silk genes by the introduced gene, the transgene, with very encouraging results that should allow us to create mixed fibres with very original properties. "

Acknowledgements to Mr. Gerard COSTE, EFPG engineer, a teacher at the EFPG who made it possible to illustrate part of this definition. 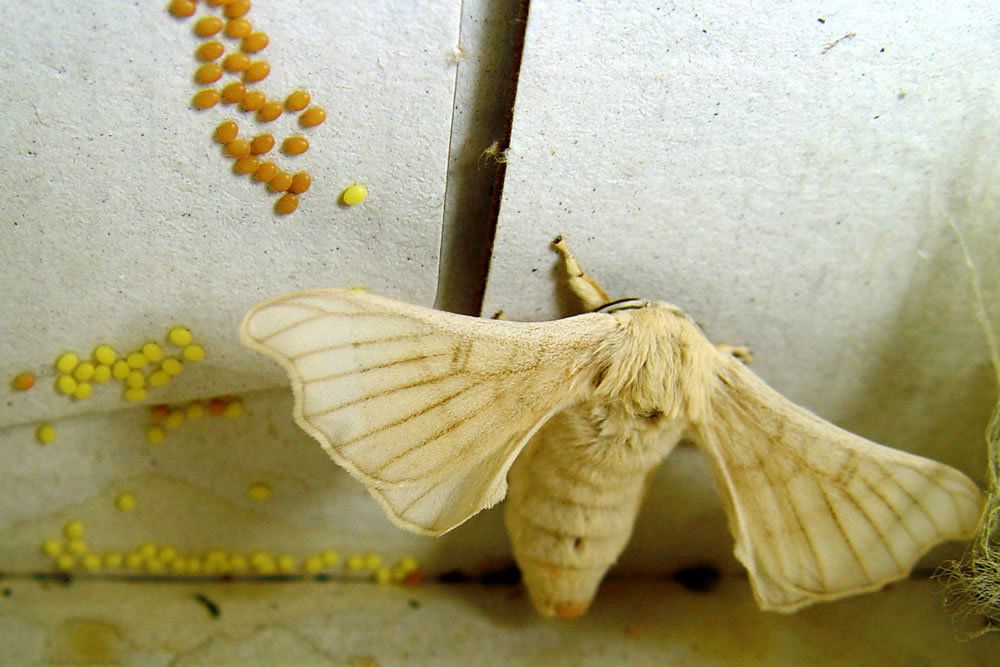