Description of the sika deer

The sika deer is a small ruminant deer with a light brown coat spotted with white patches. In winter its hair turns a darker shade and the patches fade. It has lighter hair around the superciliary arch and a white "mirror" on its rump highlighted by exterior black stripes on the croup. Its very short tail is also white with black stripes. The ventral part is greyish. Morphologically it is a little bit smaller than the fallow deer. It is differentiated by the traditional shape of its antlers which are shed and may grow up to eight tines.

Habitat of the sika deer

The sika deer is originally from the Far East. It is found in Siberia, China, Korea and Japan. The largest populations are found in the Eastern part of Hokkaido Island in Nara. A few escaped groups breed in regions of France, Switzerland and Central Europe. It prefers mixed and bushy forests and can also settle in coastal areas, in the plains or in Subalpine regions. Individuals were imported to New Zealand and the United States and a few escaped populations have settled.

Behaviour of the sika deer

The sika deer is a little more diurnal than the fallow deer readily ventures out more easily to look for grazing areas. It lives in small herds of a dozen individuals composed of females and yearlings. Males remain in small groups or solitary until the rutting season.

The rutting season and deer bellows last from late September through early November. Gestation lasts seven months after which the female gives birth to a single fawn. The fawn is weaned after six months and reaches sexual maturity at 18 to 30 months.

Diet of the sika deer

The sika deer feeds mainly on grasses as well as lichen, mushrooms, leaves, young shoots, wild fruit and even bark in winter.

Threats to the sika deer

The sika deer, which has seven subspecies, was imported to Europe where it has become an invasive species, as it easily crosses with red deer and pollutes its genetic pool. It is not considered to be endangered but its populations are vulnerable due to the expansion of human activity, especially agriculture. 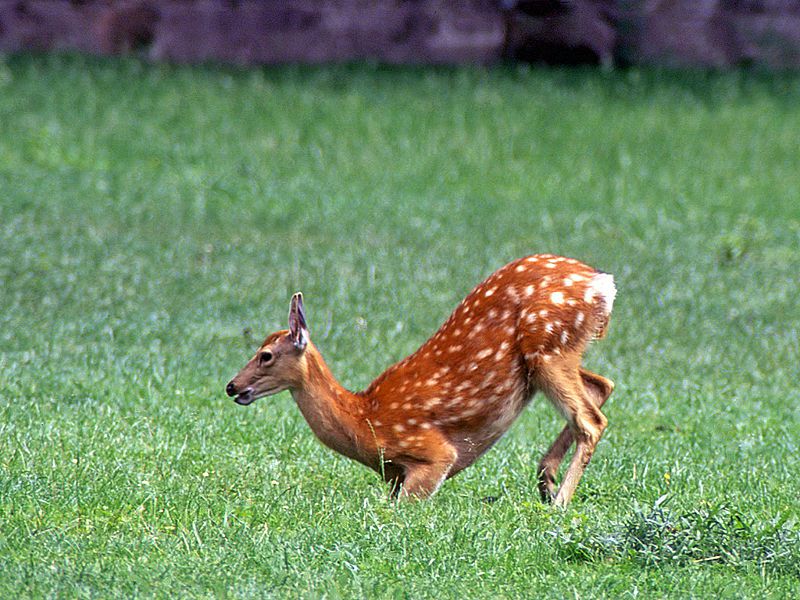