Description of the common rorqual

The common rorqual is the second largest animal living on the planet. Rorquals have very long bodies with V-shaped heads. Their dorsal colouring is grey to dark grey, while their sides are darker. The ventral part and the underside of the pectoral fins and the caudal fin are white. The cetacean has asymmetrical angular patterns on the lower jaw. A falciform dorsal fin sticks out from the back along two third of the body length, starting from the mouth. The pectoral fins are triangular and slightly curved, while the caudal fin is crescent-shaped. The rorqual has between 56 and 100 ventral folds at the throat. The head has a longitudinal crest in front of the blowhole. Each side of the upper jaw has between 300 and 400 baleen which are 75 cm long.

Habitat of the common rorqual

The areas in which the common rorqual lives are quite cosmopolitan. Rorquals are found in all of the world's oceans and seas, from the tropics to the Arctic Circle. Rorquals are not found in polar waters, the Red Sea, the Persian Gulf, the eastern Mediterranean Sea and the Baltic Sea. Rorquals prefer the deep water located beyond the continental shelf.

Behaviour of the common rorqual

As opposed to the blue whale, the common rorqual is gregarious and lives in pods of six to ten individuals. Some groups may include over one hundred individuals. It vocalises using low frequencies and its repetitive song reaches an acoustic intensity of between 184 to 186 decibels. The cetacean habitually migrates between the areas where it feeds and the area where it reproduces and gives birth. The females lead the groups in these long voyages. However, some individuals do not migrate and remain in the same area, feeding in the deep water. There is very little genetic exchange between populations in the Atlantic and populations in the Mediterranean. The common rorqual can cover a distance of 300 km per day at an average speed of 37 km/h. It exhales every 30 to 60 seconds several times after resurfacing. It can dive up to 600 metres for almost 20 minutes. Its method of propulsion is identical to that of other members of the family. It proceeds by vertical movements of the caudal fin. This swim paddle, which can have a surface area of several square metres, gives it a comfortable cruising speed.

Reproduction of the common rorqual

Diet of the common rorqual

The common rorqual feeds on krill, small fish and cephalopods, which it filters through its baleens. In order to feed it lunges into a dense shoal of krill at a speed of about 11 km/h, keeping its mouth wide open. It swallows 70 cubic metres of water, which it rejects while trapping the crustaceans with its baleens. Each skim may provide 10 kg of food, and the cetacean absorbs nearly 1,800 kg per day. To meet its energy needs, the common rorqual must spend at least three hours a day searching for food.

Threats to the common rorqual

Like other whales, the common rorqual has been heavily hunted, to the point that the International Whale Commission has had to protect North Pacific populations since 1966. Currently, group populations are estimated at around 40,000 in the Northern hemisphere and between 15 and 20,000 in the Southern Hemisphere. Threats to the common rorqual include collisions with ships and noise from human activities that disturb cetacean sonar. They are also sensitive to heavy metals and red sludge. 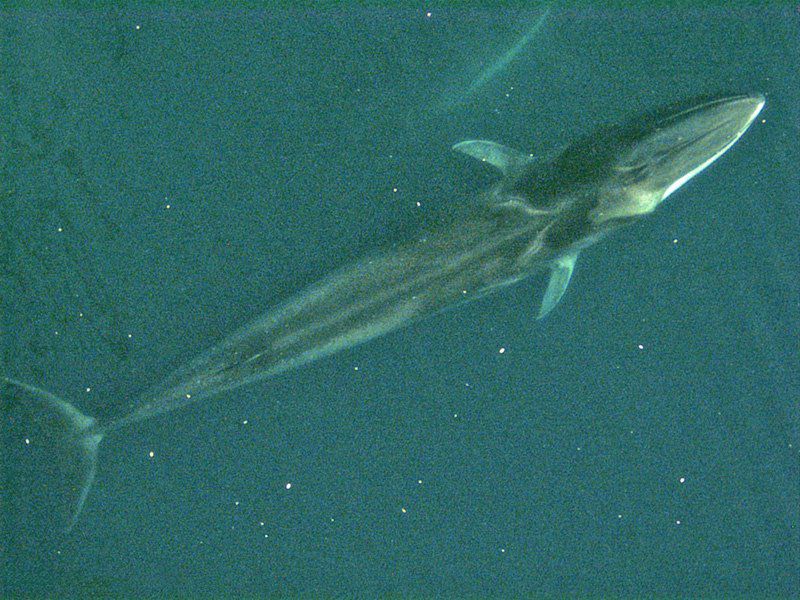