According to the French National Red List, the Reunion Island ornate day gecko is a threatened species in France.

This small apple-green lizard, with its head marked with white stripes and body covered in red patches, is one of the last terrestrial reptiles endemic to Reunion Island. It is only found on the southern part of the island, on a coastal strip 11 km long and less than 200 m in altitude, between Saint-Joseph and Grand Bois. Generally arboreal, it appears to have settled in thickets of coastal vacoas but can also be found near other indigenous plant species (red lataniers, brown manioc...) or exotic species (coconut trees, green choca...) and on rocky substrates.

Seriously impacted by the destruction of its habitat, the Reunion Island ornate day gecko is in a critical situation on Reunion Island today. Over the last ten years, several populations of this species have disappeared, and others have seen their numbers decrease dramatically. The expansion of introduced plant species, such as the false-pepper plant, is a major cause of the disappearance of its habitat. These invasive species have led to the closure of the environment and the decline of indigenous plant growth. Urban development and the construction of road infrastructure are another reason behind the decline of the species, causing the regression and fragmentation of its populations over its entire area of distribution.

In an attempt to save this small, uniquegecko, the Reunion Island authorities, supported by local associations and scientists, decided in 2010 to develop a national plan of action. This plan will make it possible to implement priority actions and to develop knowledge about the species, in order to ensure its preservation on the island. 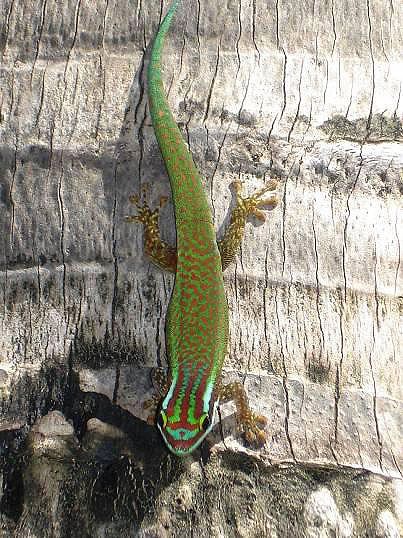