Description of the red deer

The red deer is one of the largest deer in European fauna. The colour of its coat varies according to its age, sex and the season. It is generally a brownish hue in summer and grey-brown in winter. A yellow patch called a "rump patch" decorates the rumps of both sexes. Every year the male sheds and grows back its antlers which are protected by a velvety cover irrigated with blood. The deer's silhouette is slender and its long, thin limbs are built for running.

The red deer is found in the great forests of Europe, North America, Northern Asia and Africa (Atlas mountains) where a few remaining populations of the Atlas deer remain. There are several subspecies of red deer, which explains its wide geographic distribution. It was imported to Australia and New Zealand.

Behaviour of the red deer

The red deer lives in herds exclusively composed of does and yearlings. Males only live with them during the mating season. The rest of the time the males are solitary. Crepuscular and nocturnal, the deer roams a territory of about 3,000 hectares but can travel several dozen kilometres to find richer feeding grounds. Rutting season begins in late summer or early autumn, heralded by its famous bell. This husky call, similar to lowing, can be heard over several kilometres. It is used to attract receptive females and keep rivals at bay. But if two males meet confrontation is inevitable. The two bucks butt their heads together to try and throw their adversary off balance. These fights can have different outcomes: pure and simple abandonment of the terrain by the defeated animal, serious injuries or death from exhaustion if the animals' antlers remain tangled.

Reproduction of the red deer

The female is only receptive for a single day in the year. The male that dominates the herd will mate with ten to thirty does as they become fertile. The doe generally gives birth to a single fawn after a gestation period of about eight months. The fawn nurses for eight to ten months and becomes independent when it is 2 years old. It reaches sexual maturity at between two and three years of age.

Diet of the red deer

The deer is herbivorous and a ruminant. It feeds selectively on the vegetation it finds on its territory. In mountains covered with resinous trees it eats the young branches of pines and spruce trees. In forests of broad-leaved trees it grazes on the leaves and young branches of trees and bushes, grass, and bramble and ivy leaves. It also chews the wood and in winter can supplement its diet with apples, pears, acorns, beechnuts and even dead leaves.

Threats to the red deer

In Europe the deer is only threatened by the impoverishment of its genetic heritage due to the fragmentation of its original territory. Nearly extinct in almost all forest, breeding and reintroduction plans have increased populations to the point where they have now reached record numbers in many countries of the European Union. Besides the problem of genetic deterioration, only a few subspecies are endangered and classified in the CITES annex: Cervus elaphus barbarus (originally from the Atlas mountains) Annex III, Cervus elaphus hanglu (originally from Kashmir) Annex I, and Cervus elaphus bactrianus (originally from Central Asia) Annex II. 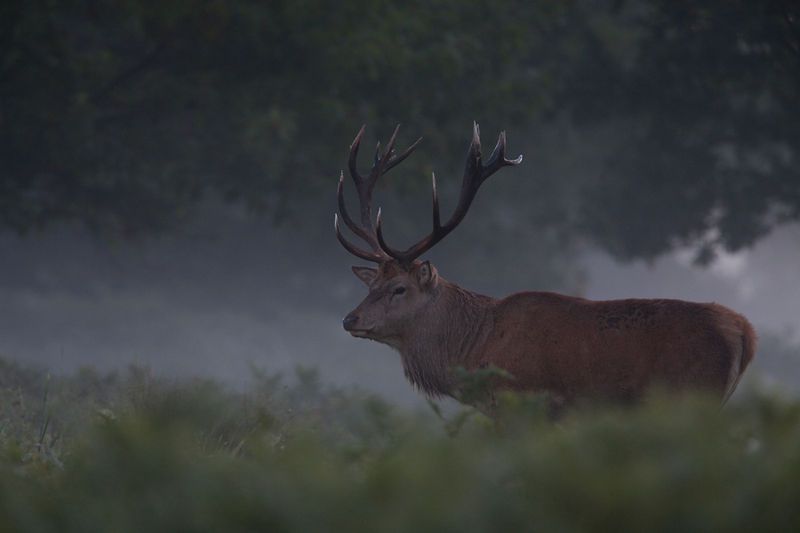