Description of the polar bear

The polar bear, which the Inuit called the " nanuq", is with the Kodiak bear, one of the largest land-dwelling carnivores. Its general morphology is identical to that of other bear species. It is distinguished, however, by a lankier, more imposing body and a completely white coat. Its head is slender and rectangular, its ears are small and rounded, its tail is short and its paws are massive. Its eyes, muzzle, lips and paws pads are black. The hairs of its coat are translucent and hollow. The refraction of visible light on the internal surface of the hollow and colourless hairs makes the animal appear white. This particular characteristic allows it to camouflage into its environment of snow and ice, in order to better surprise its prey. The yellowish glints sometimes seen on its mane are caused by the fact that its coat, composed of non-pigmented hair, has the capacity to absorb violet and ultraviolet rays from sunlight. Under its coat, its black skin has the particularity of absorbing light energy and, therefore, heat. Sexual dimorphism between males and females is very marked. As a general rule, the male is twice as large.

Habitat of the polar bear

The plantigrade lives exclusively in the polar regions of the Arctic Circle, on the ice sheet (continental glaciers) as well as, more generally, on the ice floes which it roams across. It is often found in northern Alaska, on the Canadian Arctic Archipelago, in Greenland, on the Svalbard Archipelago (Spitsbergen) and on Francis Joseph's Land, as well as in the centre-north of Siberia. The extent of its territory is, however, limited by the availability of drifting ice sheets.

Thepolar bear roams the ice floes, and the animal has become a semi-aquatic mammal, that swims long distances to reach floating pack ice and find herds of seals that are its main source of food. It can withstand cold temperatures due to the layer of fat that surrounds its body, allowing it to withstand the water's low temperature. It is a solitary animal that only seeks company during the mating season. Its hunting methods are particular because, although it moves quickly, it cannot compete with the speed of seals, which dive underwater at the slightest sign of danger. The animal does not often charge its prey, and only does so over a distance of about twenty metres, after a careful approach. In order to capture its prey without too much difficulty, the animal hides near a breathing hole that the pinnipeds use, and waits patiently for one of them to resurface.

After the seals have given birth it can also carefully approach the holes in which the pups (baby seals) shelter, stand up and fall back with all of its weight onto the ice to break it. It generally makes several attempts in order to reach its objective. Bears have been observed using an " ice cover" in order to approach seals. Without a verifiable source, it is difficult to confirm the use of this hunting method, but it is worth mentioning because, if true, it is certainly original. In fact, it refers to the following trick: the bear uses a block of ice that has broken off the ice floe. It pushes this block with its front legs and hides behind it in order to approach its prey. Once it gets close to the animal, it lunges forward to capture it. On a more mundane note, when it swims, it uses its front legs to advance and its back legs to steer.

Reproduction of the polar bear

Females of the species generally give birth to a maximum of two cubs every three years. The female gives birth during hibernation, within her lair. The mother nurses her young for three or four months, after which they leave in order to explore their icy universe. The female raises her young for three long years, during which her cubs learn how to hunt seals and choose a lair. Females reach sexual maturity at three years, while males take one year longer.

Diet of the polar bear

Unlike its brown or black cousins, which are essentially vegetarians, thepolar bear is essentially a carnivore, and its favourite prey are seals, of which two species specifically live on the ice floes, namely: Phoca hispida (ringed seal) and Erignathus barbatus (bearded seal).

Threats to the polar bear

The polar bear is listed on the IUCN red list as a vulnerable species. Pollution from heavy metals, pesticides and PCBs, which are generically referred to as POPs (Polar region pollutants), the melting of the ice floes and oil drilling operations are all threats to the survival of this plantigrade. Arctic pollutants carried by marine and wind currents poison the entire food chain, from plankton to fish, as well as the seals that the bears feed on. Seals are poisoned by mercury and lead, metals that are highly toxic to the nervous system and that cause congenital degeneration. This same phenomenon is observed in belugas (white whales) and killer whales.

The disappearance of the ice floes due to global warming is another alarming aspect. In fact, the bear's natural habitat has shrunk and, with that, the prey upon which it feeds. The floating resting places for its prey are disappearing. Instances of cannibalism have been observed several times in polar bears when are unable to find sufficient prey. Others have been found drowned... In fact, although they are skilled swimmers, the disappearance of the ice forces these plantigrades to travel longer distances in the high seas, where the water is the most turbulent. They die of exhaustion. Added to all this, trophy hunting is another danger, and all of these combined makes it easy to understand the wide range of threats faced by this very specialised species as well as its degree of vulnerability. 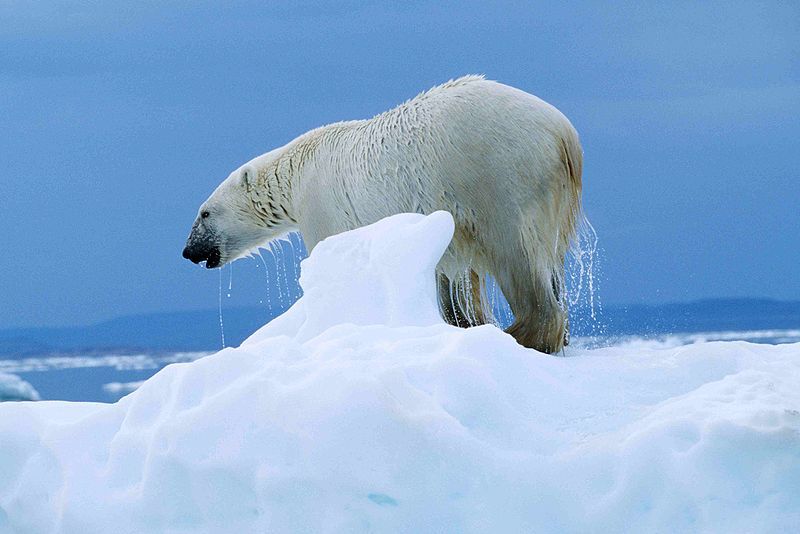