Worshipped by the Egyptians and the preferred bird of prey for royal hunts, the peregrine falcon is the fastest bird in the world. It can dive at speeds reaching about 300 km/h.

The peregrine falcon, as its name indicates, moves often, in the manner of a pilgrim or vagabond. Members of the species that nest south of the vegetation line in North America spend the winter in Central America, or in the northern part of South America.

The same size as a crow, an adult peregrine falcon has a black moustache (black line under the eye), and its upper parts are ash grey or slate blue. The lower parts of its body are white or chamois, with brown lines on its sides and thighs and spots on its belly. The undersides of the wings are white with black lines. The upper body parts of juvenile peregrine falcons are brown. Its tail is dark brown with chamois stripes and white tips; the lower parts are chamois with brown-black stripes. 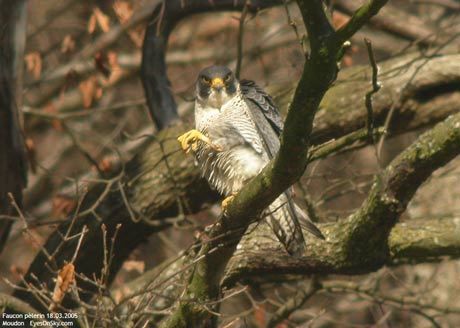