Description of the manatee

The manatee differs from the dugong by the shape of its skull and its caudal fin which is paddle-shaped, whereas the dugong's fin is divided into two. Its body is round and barrel-shaped and its skin is has shades of grey:dark on the back and lighter on its ventral part. Its pectoral fins are massive and long. Its small black eyes are placed on either side of a large skull. Its upper, thick and wide lip is covered with whiskers.

The manatee's range depends on the subspecies. The only subspecies to normally be found in marine environments is Trichechus manatus, found in the Northeast of the Gulf of Mexico and Western Florida, and North of the South American continent up to Guyana. There are two subspecies depending on where they live:

There are also two freshwater subspecies:

The last two subspecies can be found in brackish waters when moving along the coast, and in mangroves when they are moving from one river to another.

The manatee moves under the water by using a caudal fin and steers with its pectoral fins. As the manatee frequently travels in muddy, low visibility water, vocalisation plays a very important role in communication between individuals. The manatee produces a wide range of cries, whistles and chirps. Scientists believe that it also uses ultrasound, but are not sure how these sounds can be emitted as the manatee does not have vocal cords. The animal is very agile in the water and is able to roll, jump and swim backwards upside down. It has also been observed "walking" along the bottom using its pectoral flippers.

Outside the time it spends feeding, it spends several hours a day resting by floating underwater, although it must return to the surface every three or four minutes to breathe. Except for gatherings during the mating season, the manatee is a solitary animal which, however, needs physical contact when it meets a fellow member of its species. During these encounters they get to know each other by rubbing against each other and "kissing". Its cruising speed is about 5 km/h but it can reach speeds of 25 km/h when fleeing danger. The animal cannot survive in water at temperatures lower than 18° Celsius. During cold periods it sometimes migrates over 200 km from its original point.

The female manatee gives birth to a single calf after a gestation period of twelve to fourteen months. She nurses her calf for one or two years. The calf remains with its mother for two years and goes out on its own afterwards. Sexual maturity is reached after seven to nine years.

Diet of the manatee

The manatee feeds on about sixty different plant species on which it grazes in underwater meadows or in watercourses. It also ingests many fish, crustaceans and molluscs that adhere to the plants. It spends a third of its day feeding and, as the nutritional value of plants is quite low, it must eat about thirty kilos of food every day.

Threats to the manatee

The manatee is particularly threatened by human activity. Only the populations of Florida manatees are stable because the species is protected in the United States. Elsewhere the animal is the victim of hunting, deforestation, river pollution, and the destruction of mangroves. There have been countless collisions between manatees and the propellers of boats and jet skis. The Florida manatee no longer migrates during cold periods, because of the disturbances to the environment caused by man. It settles near the warm water discharges from nuclear power stations...A decline in the population linked to disturbances in its environment, as well as the low reproduction rate of the manatee, suggest a rapid decline of the different subspecies. 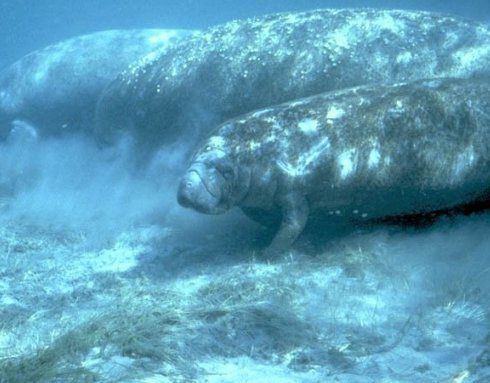