The Kodiak is the largest brown bear and the largest land-dwelling carnivore. The colour of its coat is variable. It can be dark or light brown, greyish or, on the other hand, beige and nearly yellow. Its shoulders and its front limbs are powerful, and the claws at the end of its limbs are used to dig. Its head is round and massive.

The territory of thebear is limited to Kodiak island, located south of Alaska, and a few other islands of the archipelago, such as Afognak and Shuyak, and the end of the Alaskan peninsula.

This is a calm and solitary animal which, like the Grizzly bear, can get along with other bears to fish salmon as they travel back up the river to spawn. Its habits are similar to those of its continental cousin. It is a bad climber but, on the other hand, it can reach impressive speeds while running. The bears occupy the same hunting areas, and proximity with their fellow creatures makes them easier to approach. This, however, does not mean that they are less dangerous. But their living area is smaller and they are thus more tolerant. The animal may put on 200 kilos of fat for hibernation by eating salmon and trout, which it feeds on in summer and autumn, the seasons are very short at these latitudes.

The number of cubs that a female can produce during its life depends on a number of parameters, including the animal's health, lifespan, quantity of food available, human impact on the environment and the reproductive capacity of the males. Even if they have reached sexual maturity, young males cannot breed. They are forced to yield to the dominant males. The mating period begins when the animals leave their den. Competitions between males can cause serious injuries. As is the case in almost all female bears, ovulation can be delayed and triggered at the right moment. Implantation of the egg only occurs in autumn, which allows the female to concentrate on finding food which will allow her to pass the winter while supporting her gestation. Cubs are born between January and February and are nursed for about 18 months. Their mother will look after them for up to four years. For this reason, litters are spaced out every three or four years.

Kodiak Island is mountainous, covered with forests in the north and east but only stubbly vegetation along the coast. Shoots, flowers and berries are less available, thus the bear has developed a meat-based diet. The bear mostly feeds on fish. This protein-rich diet is probably the reason why it is so large.

This bear is not threatened by human activity, but, like the polar bear, is at risk of suffering from the effects of climate change due to milder temperatures. 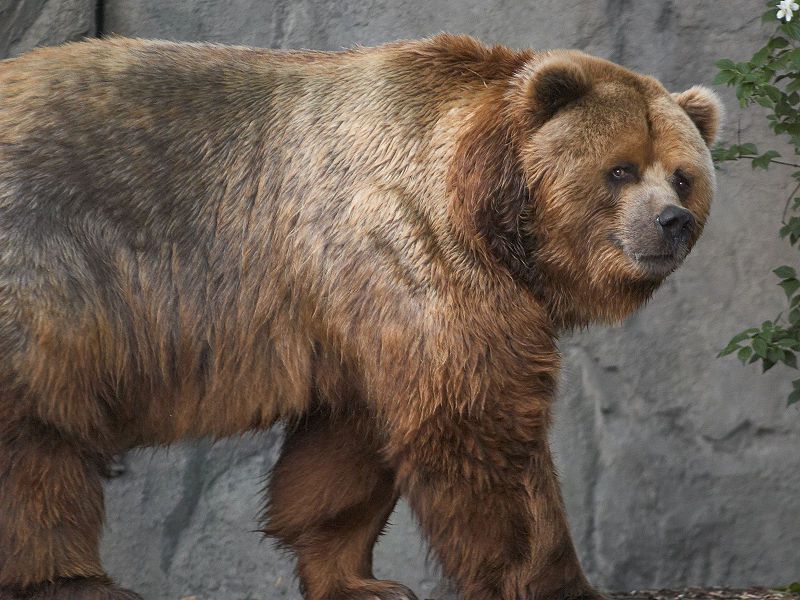