Description of the humpback whale

The humpback whale is also called a megaptera, humpback or humpback rorqual. Its body is massive, black on the top and whitish on the ventral part. The head and the lower jaw are covered with small hair follicles. The dorsal fin is located at about two thirds of the body length. The pectoral fins are very long and can reach a third of the body length, and the caudal fin, black on the upper side and white underneath, is wide and powerful. The humpback has between sixteen and twenty ventral furrows or pleats which make it possible for the throat to open wider (similar to an accordion), and its mouth has between 270 and 400 baleen plates on either side of the jaw.

Habitat of the humpback whale

The humpback whale is found in all of the world's oceans and seas between the 60th south parallel and the 65th north parallel. The species migrates and covers long distances, except populations in the Persian Gulf which stay there permanently. It is not found in the eastern Mediterranean.

Behaviour of the humpback whale

The humpback whale has a rather flexible social organisation. Most often it swims alone, but it may also join groups that form temporarily. It is a migratory cetacean that can cover 25,000 km per year. The humpback whale is found in cool water, where it easily finds food in the summertime, and tropical or subtropical water during the mating and calving season. Its complex song features low tones that vary in amplitude as well as frequency. Dives generally last from 8 to 15 minutes, but the humpback whale may also remain underwater for around thirty minutes. Before diving, it curves its back (which is where it gets its name from) and points its caudal fin out of the water. The humpback whale only fears the killer whale, but frequently manages to come out on top. Only the young pay a heavy price during attacks.

Reproduction of the humpback whale

Nuptial parades take place in winter. Several males group around a female and compete, performing astonishing displays for an animal of this size and weight. They may leap up to 5 metres out of the water. Gestation lasts from eleven to twelve months. At birth, the young calf measures a little over 4 metres and weighs about 700 kg. It suckles its mother for six months and is weaned after one year. The young whale leaves its mother the following year when its size reaches 9 metres. Males and females reach sexual maturity at around five years, when they have nearly reached their adult size, i.e. between 15 and 17 metres long.

Diet of the humpback whale

The humpback whale only feeds in summer in cold water. It mainly hunts krill but also groups of small fish, such as herring or capelin. It alternately uses direct hunting methods, charging schools of fish with its mouth open wide, or stuns its prey by slapping the water with its pectoral fins. This species has perfected a very unique group hunting technique: bubble net feeding. When the cetaceans spot a school of fish, they group together and circle under the fish while releasing air through their blowholes. The bubbles form a visual barrier that restricts the school of fish to a space that grows increasingly smaller. Suddenly, as if answering to an invisible signal, the whales rush towards the surface with their mouths open, swallowing large quantities of fish at a time. This is probably the most spectacular form of animal cooperation.

Threats to the humpback whale

The humpback whale's natural curiosity is an asset for whale watching. In fact, the cetaceans readily approach the ships while practising their displays of jumping out of the water. The females are very protective, and systematically place themselves between their young and observation boats. Boat pilots must therefore be very careful and follow the codes of good conduct to avoid uselessly stressing the mother.

An albino humpback whale that regularly travels along the Australian coast has become famous there. Due to the high number of boats that followed it every day, the government was forced to order an exclusion zone of 500 metres around the animal in order to protect it. 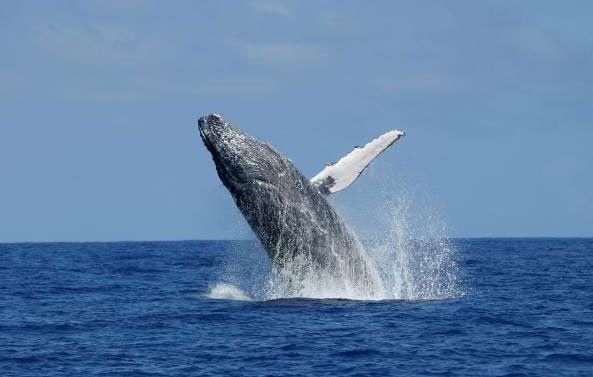