Description of the Himalayan brown bear

This bear is small and squat. Its coat is a sandy or reddish brown. As it can live in high mountains it is probable that, like its cousin the Tibetan blue bear (Ursus arctos pruinosus), the myth of the Yeti is actually based on a bear sighting. It has a hump on its shoulders, a slightly bulging face and long claws on its front paws.

Habitat of the Himalayan brown bear

This brown bear subspecies is found on the plateaus of the foothills of the Himalayas, in Kazakhstan (Tian Shan mountains, Altyn Emel, Tosksanbai and in two reserves near Almaty), in Pakistan, especially in the Deosai National Park in Kashmir called the "Land of Giants", where only about forty individuals survive. The animal mainly inhabits mixed forests of conifers and broad-leaved trees, as well as mountain meadows at altitudes higher than 3,000 metres.

Behaviour of the Himalayan brown bear

The animal is active before dawn and in the late afternoon. Solitary outside the mating season, it spends most of its time looking for food. It hibernates from November until the following April and suffers from the oxygenation problems linked to altitude.

Reproduction of the Himalayan brown bear

Little is known about the animal's habits, but we do know that rutting season lasts two weeks and mating takes place from mid-May through July. The female gives birth to one or two cubs in her den every three to four years, and nurses them until she leaves the den in the springtime. Sexual maturity varies between three and seven years, depending on the cub's sex: male or female.

Diet of the Himalayan brown bear

The bear mainly feeds on plants, shoots, berries, fruit and flowers found on its territory, but does not turn its nose up at small mammals such as hedgehogs, marmots and sometimes a sheep or goat.

Threats to the Himalayan brown bear

Its survival is threatened by human activities (Kazakhstan has an abundance of rare and precious minerals) and poaching. Many female bears have been killed to capture their cubs. Cubs are raised by gypsy populations for circuses, while male organs are used to supply the local pharmacopeia market. Considering the geographic range of its habitat and the difficulty of access (mountains of Kazakhstan and Pakistan, and perhaps Tibet), it is impossible to accurately count how many specimens are still living in the wild. 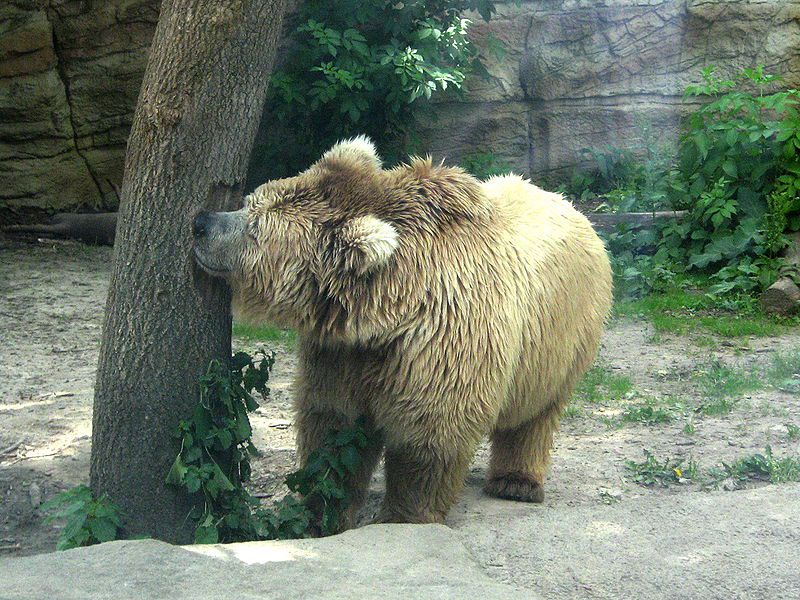