Description of the grizzly bear

The grizzly bear is one of the largest subspecies of brown bears. Its coat frequently features a mixture of different colours: beige, red, brown or black. It gets its name from the grey tips of its hairs. Its front limbs and shoulders are massive and extremely powerful. The animal uses them to dig up roots and tubers, as well as, despite its weight, to reach running speeds of nearly 66 km/h. As its claws are longer than those of other ursids, the plantigrade has a hard time climbing trees. On the other hand, it is an excellent swimmer. It has good sight and hearing, and its sense of smell is over-developed. It can smell a rotting carcass from 30 kilometres away.

Habitat of the grizzly bear

Ursus arctos horribilis is found in the northern United States (Alaska) and Canada (Yukon, Alberta, British Columbia) as well as the Kamtchatka peninsula of Russia.

Behaviour of the grizzly bear

The grizzly bear is a solitary animal, but is commonly seen in large numbers during the salmon spawning season, which it catches, without too much trouble. When a fish reaches shallow water or tries to cross an obstacle by leaping over it, the bear takes advantage of the situation to catch it in mid-leap by giving it a smack with its paw. These migrations benefit the bear, because it can thus easily reconstitute the fat it will need to hibernate and without spending too much energy. Before taking to its lair, it carefully grooms its winter coat, which it will lose during the spring.

The plantigrade is not territorial, and the hunting grounds of different individuals may overlap. But it may defend a "personal space" with imperceptible boundaries (about fifty metres or less, on average). This particular characteristic is the reason behind most attacks on people who, without knowing, involuntarily enter the bear's "sphere" too quickly . Attacks are even more brutal when the animal surprised is a female protecting its cubs, or an individual defending the carcass it is in the process of eating. Generally, these defensive attacks are limited to intimidation, such as charges stopped right before contact. However, sometimes they can get out of hand and lead to serious or fatal injuries. Grizzly behaviour and habits are still not very well understood, and give the animal a reputation for being unpredictable.

A dominant male mates with several females in late spring. Gestation lasts for seven months, after which, in January or February, in the darkness of a cave, the female gives birth to one to four cubs. However, generally, only one or two survive. They are nursed for eight months before moving on to learn how to hunt and fish. This phase is crucial, for if the cub cannot learn these techniques from its mother, it has no chance of survival. Also important is the danger posed by males, who will not hesitate to kill the progeny of a rival to incite the female to ovulate once again. Sexual maturity is reached at between four and six years old. Usually, the grizzly mates with a member of its own species. However, sometimes it may crossbreed with polar bear, who shares its territory.

Diet of the grizzly

The bear is an omnivore, and, however 90% vegetarian. Most of its food consists of flowers, plants, berries, fruits, roots and tubers, different shoots, as well as fish, crustaceans and shellfish, insects and mammals. It sometimes also eats weak or sick deer, as well as domestic sheep and cattle under certain conditions.

Threats to the grizzly

The grizzly is threatened with extinction in Canada, in the province of Alberta, which has less than 700 individuals. It is mainly trophy hunting that has caused this decline. However, another factor behind this decline is clear-cutting by forestry and mining companies, with the support of the Canadian government. The primary forests that have remained intact since the last glaciation, about 10,000 years ago, are refuges for many animal species including the grizzly, and are disappearing at an alarming rate to produce disposable paper or to extract oil from the bituminous sand... 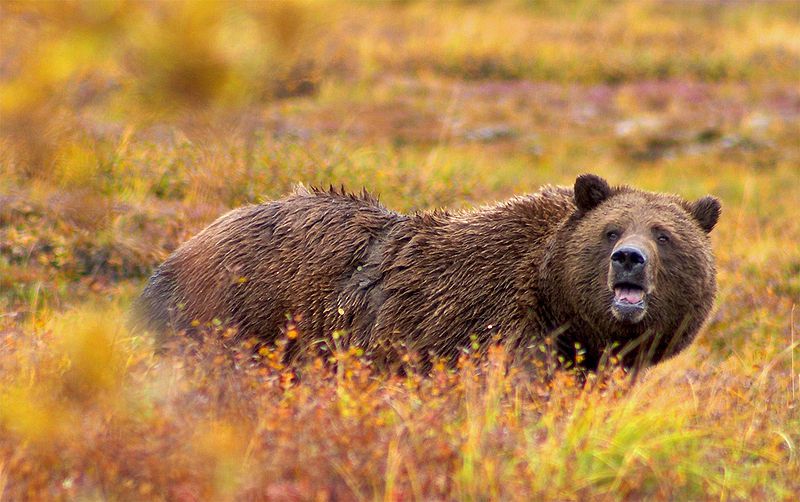