According to the National Red List in France, the green sea turtle is a threatened species in France.

Among the five species of marine turtles that live in the waters of Reunion Island, the green sea turtle is found along the island's entire coast. It is often observed on the slopes of reefs and the rocky coasts, which are its feeding and living habitats. Of these five species, it is the only one whose adults have a herbivore diet, feeding on red algae in particular.

Since the mid-20th century, clutch sites on the beaches of Réunion Island have undergone an outright decline with the development of the island. Due to the growing urbanisation and disturbances caused by tourist activity, clutches have become rare. Today, only a few female turtles visit a few beaches where they bury their eggs. Furthermore, even though they are covered with sand, clutches are often preyed upon by rats and dogs. In the sea, the turtles are threatened by collisions with ships, getting trapped in fishing nets, or even marine pollution. The green sea turtle, of which the flesh and eggs were widely eaten until the 1980s, has been protected since 1983, but is still sometimes targeted by poachers.

Many studies and species conservation programmes have been implemented on Reunion Island. A project launched in 1999 in Saint-Leu to rehabilitate the beaches and reduce the impact of accidental capture, in collaboration with local fishermen has contributed to a return of the green sea turtle over the last few years. The creation of the Natural Marine Reserve of Reunion Island in 2007 should also support the future development of the species in the waters of Reunion Island. 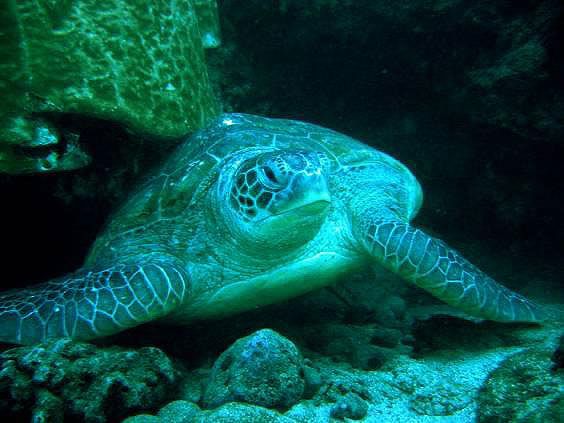