Description of the giant panda

The giant panda, of which the Latin name means "black and white cat-foot", is a massive animal with a smooth black and white coat. Its paws, peculiarly, each have six digits. Its eyesight is not very good, in fact it is very short sighted, but it compensates for this deficiency with a very well developed sense of hearing and smell. The study of its teeth shows that it is a member of the Ursidae family. Females are generally smaller than the males and less stocky. The subspecies found in the Qinling Mountains is distinguished by its brown coat on the stomach area, a smaller skull and larger molars.

Habitat of the giant panda

The "large cat bear" (its Chinese name) only lives in mountainous regions covered with forests in central China, such as Szechuan and Tibet, between 1,800 and 3,400 metres altitude. These areas are generally difficult to access. The subspecies Ailuropoda melanoleuco qinlingensis, which was only discovered in 2005, lives in the Qinling Mountains.

Behaviour of the giant panda

Outside the mating season, the giantpanda is a solitary animal. It is an excellent climber, and can 'tightrope walk' along the branches of large trees. Despite its good-humoured appearance, it can be aggressive when it is cornered. It regularly moves in search of food, which takes up most of its time. It spends the night sheltered in a rocky crevice or in the hollow of a tree.

Reproduction has never been observed in the natural environment. The pandas have naturally low fertility – the mating season only lasts a few days per year - which becomes even more difficult in captivity, as it is aggravated by laziness - the principle of the least effort, as the animals are fed by human hands and no longer have to worry about their sustenance - and psychological disturbances. A female gives birth to one or two cubs per litter, but she only cares for one of her young, leaving the other to a certain death. Gestation lasts for a period between 112 and 163 days.

At birth, the cub weighs only a few hundred grams, and is raised by its mother alone. It is weaned at the end of 46 weeks and feeds itself independently around 18 months. Sexual maturity is reached around the age of six years.

Diet of the giant panda

Even though it also eats insects and eggs, the giant panda feeds almost exclusively on bamboo. Its survival is closely linked to the good health of these plants. It spends nearly 14 hours per day chewing on shoots. As it does not have a cecum to help it digest, it can only absorb 17% of the cellulose of the bamboo that it ingests, or the most tender part, which is the heart of the plant. Using its sixth digit, a false opposable thumb, it gathers and holds the stems of the plants that it eats. Nutritionally, it needs 20 kilogrammes of bamboo per day.

Threats to the giant panda

The bamboo forests, the last bastions of the giant panda, are shrinking, due to their exploitation by Man, or their clearing for farmland. The fragmentation of its habitat makes the giant panda vulnerable, for this animal must adapt to the life cycle of bamboo, which dies after flowering. It takes about ten years before new shoots reach a size large enough to be eaten. Small isolated populations are at risk of in-breeding. This inbreeding reduces resistance to disease, reproduction rates, which are already not that high, and adaptability to environmental changes. Threatened by extinction, the giant panda is listed in Annex I of the CITES, also called the Washington Convention. Its toy-like appearance and especially its rarity have made it the symbol of the World Wildlife Fund (WWF). 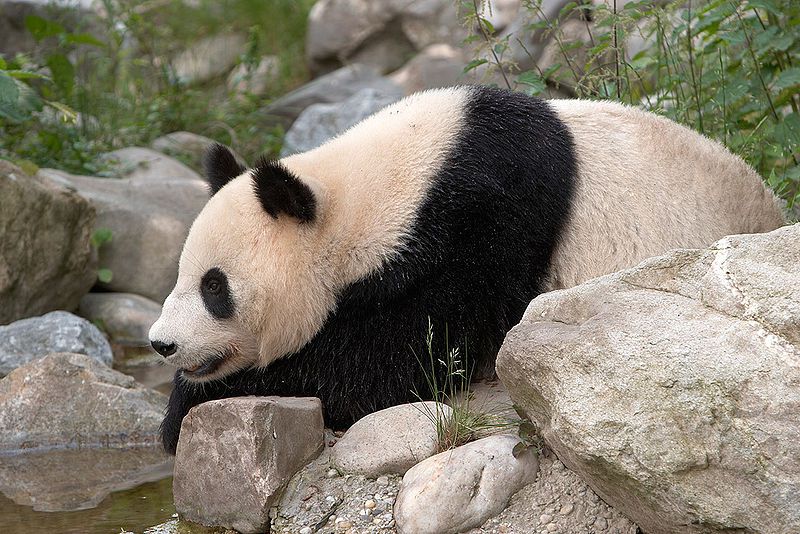