Description of the fallow deer

Habitat of the fallow deer

The fallow deer originates from east of the Mediterranean basin, but was naturalised since ancient times throughout Southern Europe and the Middle East. The major wild or feral herds resulting from releases in the Middle Ages are currently found in Central Europe, while escapees from parks have recently formed forest populations in France. Dama mesopotamica is a similar species and has withdrawn to the forests of southern Iraq and Iran. Sparse forests of broad-leaved trees and meadows are this deer's usual biotope.

Behaviour of the fallow deer

For most of the year both sexes of the animal live separately and only come together during the rutting season. Herds generally consist of about a dozen doe and yearling fawns, while males live alone or in small groups. The fallow deer is the most nervous, but, paradoxically, also the most curious deer. When it is alarmed it tries to hide in the undergrowth of dense forests of tall trees. Its territory covers a quite limited area in which it lives in accordance with its needs. It remains under cover during the day and rests, and leaves the undergrowth at dusk until dawn to graze.

Reproduction of the fallow deer

During the rut which begins in early October and lasts until early November, the male's facial glands secrete an oily, thick, black substance. The belling, which is quite unpleasant, looks like a sort of vomiting. The female gives birth, to one or sometimes two fawns, in early summer after a gestation period of about eight months. The female nurses her young for a few months and sexual maturity is reached after about sixteen months. The does, however, are only able to procreate at the end of their second year.

Diet of the fallow deer

The fallow deer is a ruminant herbivore which mainly feeds on grass, but also eats fruit such as acorns, chestnuts and berries. It is very fond of the bark of ash trees which it gnaws thanks to the angle of its incisors. But its menu also includes buds, leaves and young branches.

Threats to the fallow deer

As opposed to its cousin the Persian deer, which is classified EN (endangered) by the IUCN, the European fallow deer is not considered to be a threatened species. 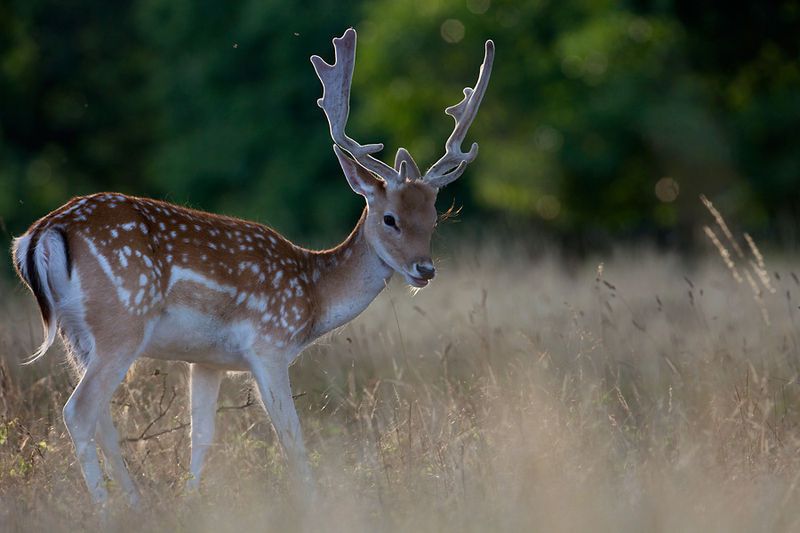