The European hornet is a eusocial hymenopter from the Vespidae family, a predator of insects, becoming a phytophage in late summer, feeding on liquid and sweet foods. The adults feed larva with a mush of regurgitated insects.

The female measures 25 to 35 millimetres long and has a stinger. Males and workers are smaller. The wings are red. The abdomen, petioled, is yellow-orange. Otherwise, it looks like a wasp.

The European hornet Vespa crabro a social insect, living in small groups (a maximum of a few hundred individuals) in paper nests built from a paste of bark ground up with saliva and fixed into the hollows of trees or walls. It mainly flies during the day. Note that old nests are never reused. European hornets travel up to 1,500 metres from their nest. Colonies disappear in the winter. Only fertile females pass the winter. The queens fly starting in mid-April, after setting up a nest and a few larvae. Then, the workers care for and feed the brood up until October. Males and females of the new generation develop during the summer. The males and the workers die in winter.

European hornets dig into ripe fruit, the tender bark of young trees and loot beehives. To feed their larvae, the European hornet is an entomophage, which makes it, all in all, beneficial for agriculture.

The European hornet lives in Europe up to the 63rd parallel as well as in the United States and Canada, where it is considered an invasive species.

The classification of European hornets. © DR

The chemical composition of the venom (of Vespidea) is complex: enzymes, peptides, amines (histamine), amino acids and other allergenic substances. The venom has two effects: cellular toxicity and immunological effects. The wasp injects between 2 and 10 microgrammes of venom. The European hornet, which can sting several times, injects about the same amount of venom.

Venom is inoculated intradermally. The European hornet has a long stinger, and venom can be injected directly into the blood vessels, thus accelerating the reaction. Venom can be denatured by heat (hair-dryer) or cold (ice) to soothe pain. It is important to disinfect the area and make sure you have a tetanus vaccination. If necessary, consult your doctor.

A European hornet seen from the front © DR

Be careful when removing nests: people who are allergic to hornet stings should refrain from doing so…as for everyone else, use proper protection and call the fire brigade for help, especially if the nest is large.

This hornet, described by Lepeletier in 1836, is found throughout most of Southeast Asia: India, Bhutan, Laos, Thailand, Vietnam, China, Korea, Indonesia…

Nests have been found in the Lot-et-Garonne region of France over the last few years, explains Claire Villemant, specialist in hymenopters at the Museum. The first confirmed identifications are recent. This news is slightly worrying.

The Asian hornet is no more aggressive or dangerous, but it is a predator ofbees and social wasps, whose nests it attacks to find food. Thus, to prevent this type of hornet (which undoubtedly arrived from the East via goods transport) from acclimating and proliferating, it is best that nests that are found are destroyed - but only after a rigorous identification process, so as not to harm a useful insect, such as the European hornet.

Asian hornets can be recognised by their entirely brown-black velvety thorax and their brown abdominal segments, edged with a thin yellow-orange band. Only the 4th segment of the abdomen is nearly entirely yellow-orange. Its brown legs have yellow tips. The head is black and the face yellow-orange. This exotic species is impossible to confuse with the only species of hornet that lives in France. Today's climatic conditions are particularly favourable to the multiplication of species from warmer regions.

The hornets and the honeybees, by La Fontaine…

« An artisan's work is easily recognised.
A few honeycombs were left unclaimed:
Some hornets claimed they were theirs;
The bees objected,
The matter was brought before a wasp.
Who had a very hard time deciding the case. »

(This fable is an argument against the delays and costs of the legal system: even back then!) 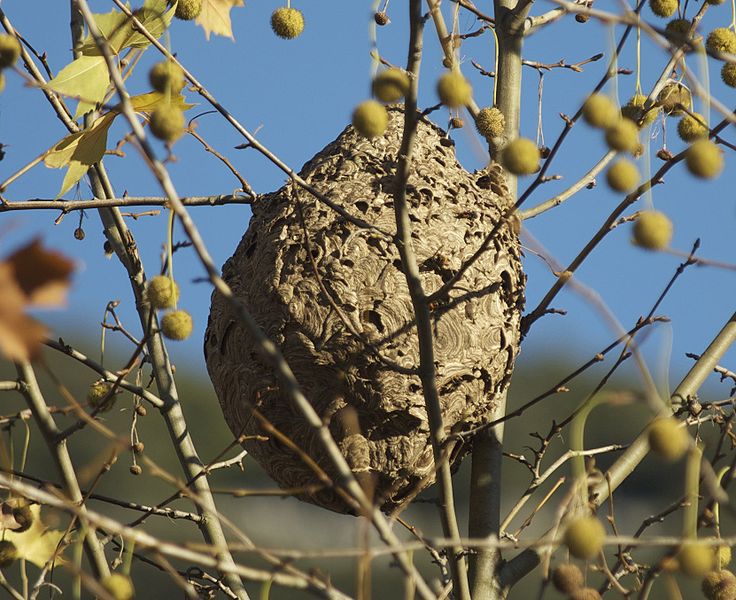