The European corn borer (Ostrinia nubilalis) is a moth of which the caterpillars often infest corn en masse, and is targeted by many varieties of "Bt" transgenic crops, including MON810.

Recent studies have shown that the males and females of this destructive pest are able to spread over several hundred metres, justifying - a posteriori - the maximum distance imposed by American legislation since 2000, of 800 metres between plots of land with Bt corn and refuge areas.

Egg masses of the European corn borer are flat and cream white. Eggs are laid on top of one another like fish scales. On maturity, the larvae are cream white to pale grey and have two small patches on each abdominal segment. They are about 2.5 cm long and have a black head. Adults are light brown moths, about 2 cm long, with dark, sinuous lines on their anterior wings. 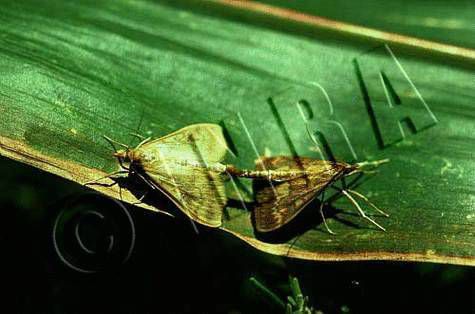