Description of the European brown bear

Thebrown bear is a large animal with a short tail whose coat is of varying shades of brown, from grey, beige and even black, sometimes with a mixture of all these colours. It sports a large muscular protuberance above its shoulders, which provides power for its upper limbs when it digs into the ground. Its head is large and round. It has five digits on each limb, with powerful and non-retractile claws. It is able to stand on its hind limbs to catch food or intimidate enemies, and it can reach speeds of up to 56 km/h while running. Its hearing and sense of smell are developed to compensate for its weak eyesight.

Habitat of the European brown bear

The European brown bear is mostly found in the Nordic forests or the ancient mountain forests that date back to prehistory. It mainly lives in the isolated regions of Scandinavia and Russia, the Balkans and the Carpathians. A small population is trying to survive in the Pyrenees and another in the north of Italy. Its range is restricted to the highlands, located between 800 and 1,200 metres, for the largest amount of biomass and diversity of food sources needed for its diet are found at this altitude. It prefers covered forest environments and avoids open areas, such as prairies or fields. In the Pyrenees the bear has been pushed back to the limit of the highlands and the subalpine level under the pressure of human activity, between 1,500 and 1,800 metres. The territory must meet the needs of the animal and its annual cycle.

Behaviour of the European brown bear

Solitary outside the mating season, the animal is more crepuscular and nocturnal. Its seasonal activity alternates between seeking food and the mating season. During summer and autumn, the brown bear builds up its fat reserves to survive the winter. It can then put on 10 to 14 kilos per week, which is not too much, because it can lose up to 200 kilos of its initial weight during hibernation in a cave or sheltered cavern. This only happens in regions where the bear cannot find enough food during the winter. In milder latitudes it does not hibernate. Its sleep is not very deep, but is broken by several awakening periods.

Reproduction of the European brown bear

The rutting season is relatively brief. It lasts for two months after hibernation. During the mating season males travel long distances in search of females. The brown bear has the particular characteristic of being able to block the segmentation of the egg, which resumes a few months later in November, after hibernation has begun. Whether or not the embryo will resume development depends on the fat reserves accumulated. The gestation period is from six to eight weeks and ends when the animal gives birth in its den around January and February. The female generally gives birth to one or two cubs, sometimes three, every two or three years. This period generally corresponds to the learning phase for its young. Sexual maturity is reached between three and seven years.

Diet of the European brown bear

Even though it is omnivorous, the brown bear is mainly vegetarian. Its diet consists of plants, berries, tubers, shoots and mushrooms, as well as insects, fish and mammals, and, of course, honey when it can find it. In summer, the plantigrade eats a lot in order to build up its fat reserves, which it will draw from during hibernation. Man has increasingly encroached on its territory, where it is now increasingly hard to find food, and the bear frequently makes do with the food waste that it finds in rubbish bins or dumps.

In some national parks of the United States, the bears are fed by tourists and gradually become more insistent, and therefore dangerous. They can break down the cabin doors to rifle through cupboards or tear off the doors of parked cars. This situation causes serious safety problems in many towns or tourist sites. The brown bear eats between 10 and 20 kilogrammes of food per day.

Threats to the European brown bear

The European brown bear is not considered endangered by the IUCN. Current populations are sufficient to maintain the species. The few individuals that are artificially maintained in the Pyrenees do not constitute a particular species and do not justify classification on the red list of endangered species. Other subspecies, on the other hand, are considered vulnerable, such as Ursus arctos beringianus, the brown bear of Kamtchatka for which, however, 500 hunting permits were issued in 2005 by the Ministry of Wildlife management in this region of Russia… 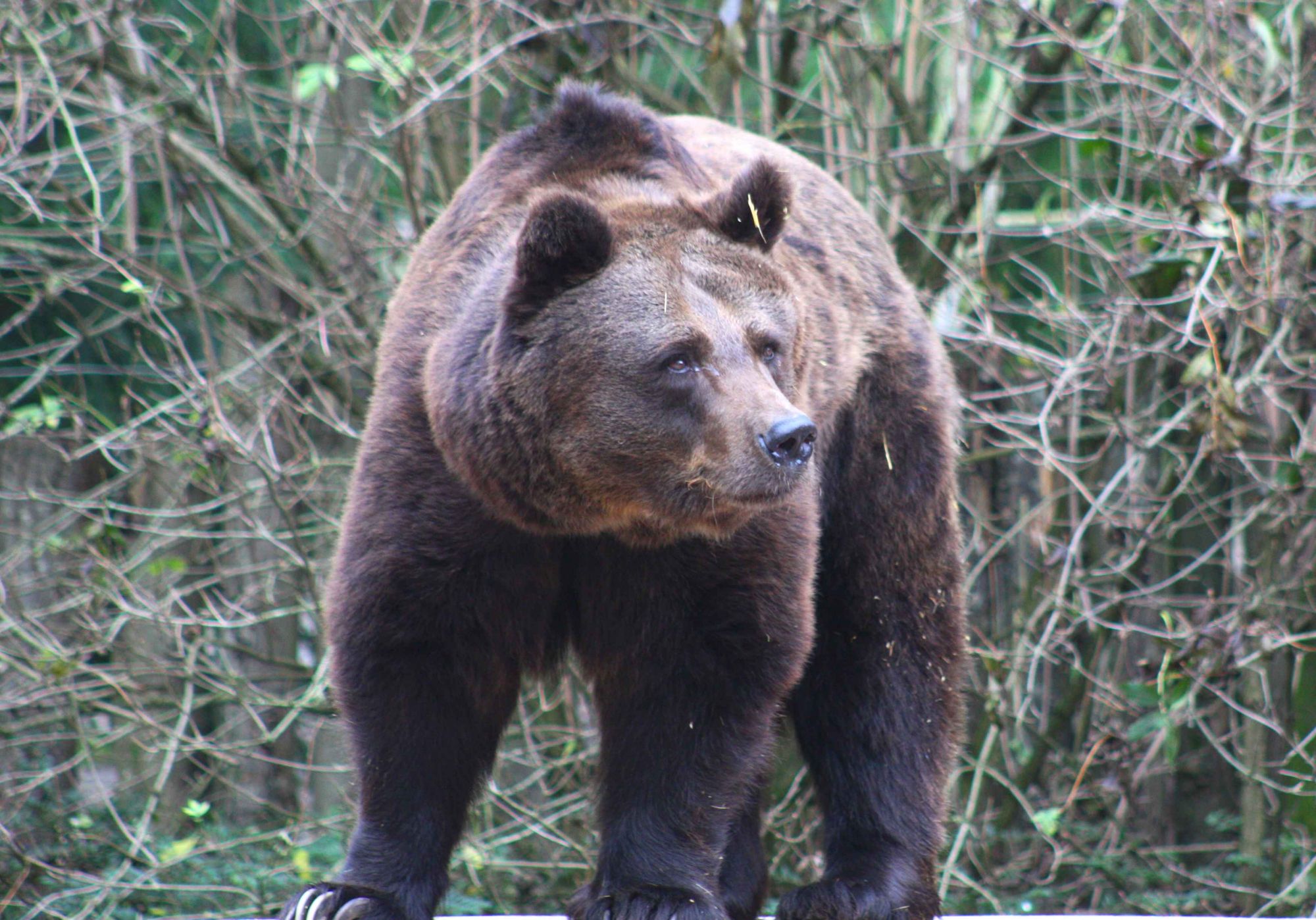