Description of the crabeater seal

The crabeater seal has a slender and spindle-shaped body with a uniformly grey-white coat. Its head extends into an elongated and slightly turned-up, snout-shaped muzzle. Its nostrils are placed far apart and its jaws have finely lobed adapted teeth which function like the baleen plates of cetaceansto capture krill. Its ears are not very visible. Its front swimming flippers are wide and well developed.

Habitat of the crabeater seal

The crabeater seal is restricted to the Antarctic continent. During the southern summer it is especially found on Graham Land and in the Ross Sea. Some specimens have been observed along the coasts of the South American, Australian and South African continents.

Behaviour of the crabeater seal

The crabeater seal moves about by crawling over the ice floes. It can crawl at speeds between 19 and 26 km/h, while in the water its average speed is 12 km/h. The pinniped practices "spyhopping", by raising its body vertically outside of the water to observe its surroundings, and "porpoising", which consists of leaping entirely out of the water. It is a gregarious animal, and some concentrations of crabeater seals may number several hundred individuals. The crabeater seal is also an explorer and a bit foolhardy, as it may venture far inland to... die of exhaustion. Sea leopards are the major predators of this species and account for 80% of crabeater seal pup deaths during the first year. There are many survivors who sport scars from attacks from which they have escaped. As their attacks mainly occur in the water, the rate of predation by killer whales is not known.

Reproduction of the crabeater seal

The female crabeater seal also practices differentiated implantation of the egg of about three months and gives birth to a pup after a gestation period of about eleven months. At this stage the newborn weighs between 20 and 35 kg and measures about 1 metre. The pup is quickly weaned:after two to four weeks. Females are ready to reproduce as soon as they are three years old, while males reach sexual maturity between the age of three and six.

Diet of the crabeater seal

Its name is misleading: the crabeater seal feeds almost exclusively on krill. It may also feed on fish, cephalopods and different invertebrates.

Threats to the crabeater seal

There are no threats to the crabeater seal whose actual numbers are estimated to count over thirteen million individuals. It therefore represents the largest population of mammals on the planet after man and rats. 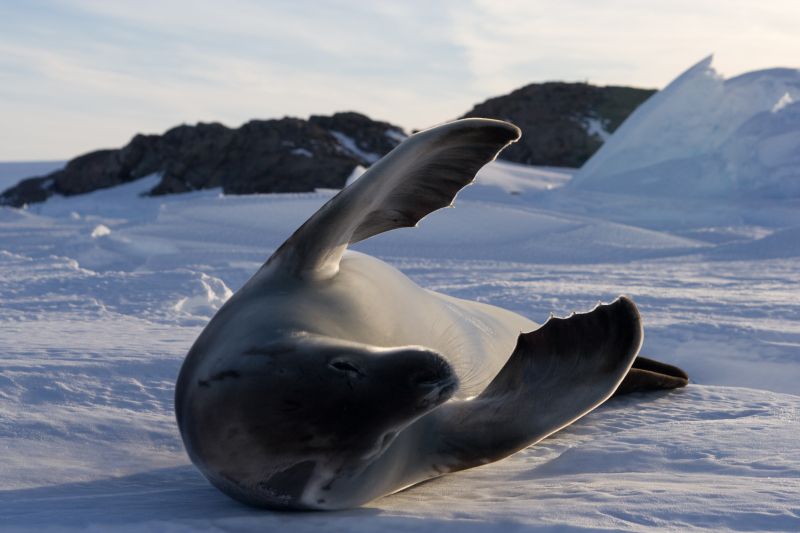