According to the French national red list Cotylopus acutipinnis is a threatened species in France.

Two closely related cousins of the species live in the clear and oxygen-rich waters of Reunion Island: Sicyopterus lagocephalus and Cotylopus acutipinnis, the latter is endemic to the Mascarenes.

In terms of abundance, Cotylopus acutipinnis is a dominant species in the island's piscicultural freshwater stocks. These gobies have a unique life cycle: adults live and reproduce in rivers, while their larvae spend a few months growing in the sea and return to the river to finish their metamorphosis and become juveniles and then adults. These fish can be found at high altitudes for they are very skilled at clearing obstacles.

Populations of Cotylopus acutipinnis are naturally subject to very high variations. However, obstacles preventing the free circulation of individuals such as dams limit both colonisation in their natural habitat as well as the completion of their reproductive cycle. Juveniles, colloquially referred to as “bichiques”, are fished in great numbers at the mouths of rivers when they return to fresh water. This is a major source of pressure on the species.

On the other hand, in a few rivers of Reunion Island, there is also the pressure of poaching adults, which it is prohibited to fish. Considering these sources of pressure, the population has probably experienced a drastic decline since the 1980s. In the light of the decline documented over the last few years the species is already classified “near threatened”. 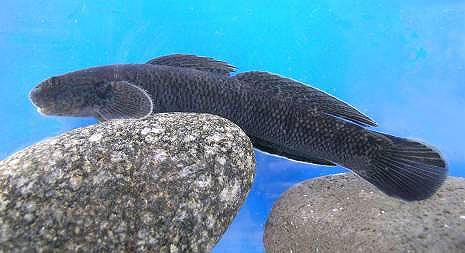