Very widespread and abundant throughout Europe and in France up to altitudes of 2,000 metres. Number of generations per year: 2 to 3.

Appearance: the male and female differ by the colouring on the undersides of their wings. The male is sky blue while the female is brown with small orange patches sometimes visible along the edges. Both sexes have a well-defined white fringe. The undersides of the wings vary from white to brown depending on the season, and are flecked with many black patches circled in white.

Whitish, spherical and smooth, the eggs are laid one by one on the host plant.

Appearance: green and relatively hunched up, it is covered with many hairs.

Brown and hunched up, it is placed on the soil litter.

The butterflies of the subfamily Polyommatinae look very similar and it is difficult to differentiate them from one another. Carefully examine the placement of the black ocelli located on the undersides of the wings in order to correctly identify the species in question. 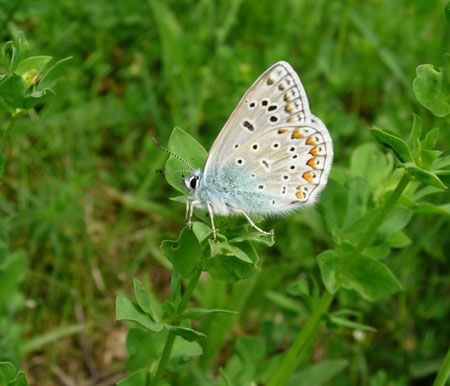