This butterfly is very common and quite abundant in Europe, especially in France where it is found at altitudes of up to 2,000 metres. Number of generations per year: 2.

Appearance: the upper wings are an orange tone with many brown patches. The shape of the wings is particularly characterised by its ragged edge, with a C-shaped white mark in the middle of the hind wings, on the underside. The underside of the wings can be a tawny (first generation) or darker (second generation).

Shown here is the characteristic white marking of the comma. © Benjamin Bergerot

Green, round and ribbed, the eggs are laid, individually or in groups, on the upper side of the leaves of the host plant.

Size: 35 mm during the last stage.

Appearance: the head is black with two protuberances on top. The body is brown with a dorsal plate that covers the last two thirds of the caterpillar. Points on this plate are white, while those closer to the head are orange.

Brown and prickly, with a silvery-white patch, it is attached, head down, by a hooked appendage, the cremaster.

In the Mediterranean region this species may be confused with the southern comma. It can be easily identified by the white "C" visible on the underside of the back wings, which is an "L" on southern commas. 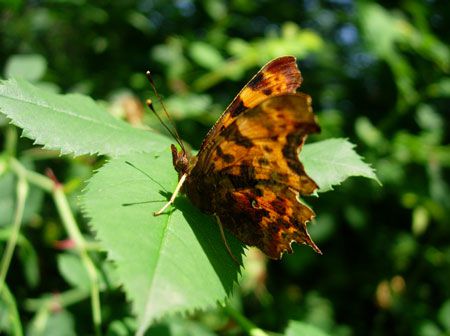