In moths, the caterpillar is the equivalent of the larvae in other orders of insects.

Description of the caterpillar

The moth passes through different phases of development before becoming an imago. The caterpillar is the second stage. Embryonic development lasts from eight to fifteen days, after which the caterpillar emerges. In order to emerge, the caterpillar eats the chorion, which is the egg membrane. This larval form of the moth has a segmented body and a head with crushing mouthparts. The latter are very useful as the caterpillar begins to feed as soon as it is born and multiplies its weight by over 1,000 times in just a few days. The three thoracic segments each have a pair of legs while some abdominal segments have false legs, which have hooks on them.

Different species of moths infest one or several host plants, and after they have been used to support and shelter their eggs, the plants become food for the caterpillars.

When many caterpillars are present, they can become a real pest to plants. In this case, they are called defoliators. The most representative species are pine processionary caterpillars, also found on oak, with irritating hairs, codling moth caterpillars, from the Tortricidae family, the spindle ermine caterpillar from the Yponomeutidae family, and many more.

In order to grow, a moth caterpillar must pass through different larval stages and moult. During these transformations, the caterpillars change not only their size, but also their shape or colour. Caterpillars can be smooth or covered with hair. Some are very colourful, others have more neutral tones.

The role of caterpillars in the ecosystem

Caterpillars are good for the ecosystem, as they eat leaves, which helps light reach the soil more easily. Caterpillar droppings fertilise the soil with mineral salts and trace elements which are beneficial to plants and fungi, and represent a major nutritional source for coprophagic insects. Holes in the leaves are also used as signs by some bird species (great tit) which use these signs to know where to find caterpillars to feed their young. This is why their eggs are laid and incubated at about the same time as the period during which caterpillars develop. 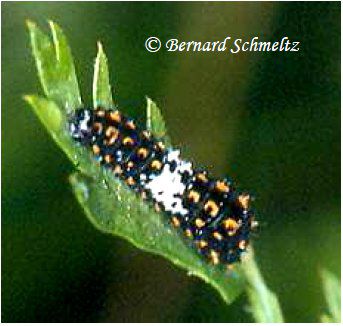