According to the French national red list, the Bourbon crested starling is an extinct species in France.

Characterised by a white crest on its head, the Hoopoe starling is one of the 11 species of birds endemic to Reunion Island that have disappeared from the island (and consequently from the earth) after the arrival of man. While this species was still relatively common until 1840, it was never mentioned after 1850. This sudden extinction could be linked to a fatal cohabitation with introduced predators, such as the black rat, and introduced competitors, such as the common myna, a bird originally from India. But the most decisive cause behind its disappearance is probably the introduction of a pathology which could have contaminated all individuals of the species.

Today information about the Bourbon crested starling comes from discoveries of bone fragments, drawings made in the past, two birds preserved in alcohol and about twenty other specimens that were stuffed and spread over different French museums. One of these specimens is preserved in the Reunion Island Natural History Museum. 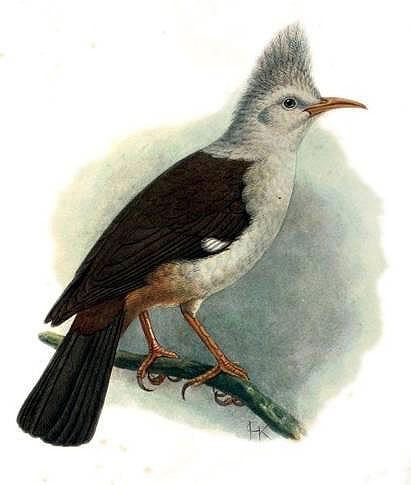