In the past, this species was very common in Europe and France. This butterfly has suffered major decline in Northern Europe and Western France due to its sensitivity to pesticides and the destruction of hedges. Number of generations per year: 1.

The black-veined white can be recognised by its white wings with black veins. © Benjamin Bergerot

In the shape of a ribbed spindle, eggs are laid in groups on the leaves of the host plant.

Appearance: hairy, predominantly black, two discontinuous orange stripes run lengthwise down its back. The ventral part is grey and is covered with long white hairs.

Concave, bright yellow and flecked with small black spots, it attaches itself head upwards to the branches of trees using a silk girdle and a hook-shaped appendage: the cremaster.

Can be mistaken for first generation green-veined white. However, the black-veined white has thin, distinct, marked black veins.

Regional protection in the Ile-de-France region (ministerial decree of 22 July 1993). 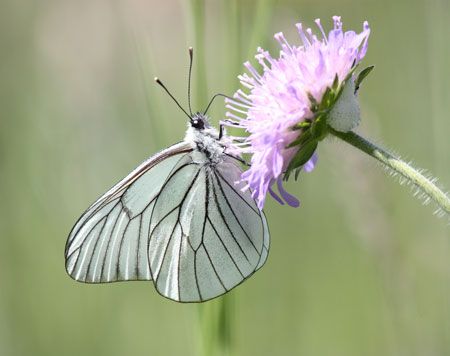