Description of the bearded seal

The bearded seal has a round, massive body with a grey-brown coat that is dark on the back. Its reddish head, on the end of a massive and short neck, is small and its muzzle has thick bristles that curl when dry. Its small ears are located to the rear of its eyes. It is tricky to distinguish the male from the female, as both are approximately the same weight and have the same build. Its clawed flippers and its tail seem atrophied compared to its torso.

Habitat of the bearded seal

There are two subspecies of the bearded seal: Erignathus barbatus barbatus found in the North Atlantic and Canadian Arctic up to Greenland, in Svalbard and in the Laptev Sea in Russia, and Erignathus barbatus nauticus which lives in the Bering Strait from the Eastern Siberian coasts and the Kamtchatka peninsula, up to the central Canadian Arctic. The bearded seal only lives in the icy waters of the Arctic polar circle.

Behaviour of the bearded seal

The bearded seal is a solitary animal that prefers floating pack ice to ice floes. It is a naturally curious animal that allows man to approach it easily. It seems to emit dolphin-like clicks when it dives deep in search of food, and to communicate with other seals. It has a wide range of vocalisations composed of long and resonant cries ending in moans. In winter it lives under the ice where it manages to keep its bearings and in which it maintains breathing holes. Its main predators are the killer whale and the polar bear.

A seal hesitating to get into the water. © Ansgar walk, CCA-SA 3.0 Unported license

Reproduction of the bearded seal

The mating season ranges from late March to mid-May depending on the habitat. The female gives birth to a single pup on a patch of floating ice after a gestation period of about eleven months. The pup can swim from birth and nurses for three weeks before feeding itself. At birth, the pup weighs an average of 25 kg and measures about one metre long. Females reach sexual maturity after about five years, while males are only able to breed after six or seven years.

Diet of the bearded seal

The bearded seal essentially feeds on benthic species such as squid or other cephalopods, and fish such as cod. But it can also be found in shallow water where it finds bivalve molluscs and crustaceans, especially crabs, which it detects in the sand using its ultra-sensitive whiskers.

Threats to the bearded seal

As commercial hunting is prohibited, its numbers are relatively stable except in a few areas where populations are fragmented and isolated. Specimens killed for food by indigenous peoples are not a threat to any of the current populations.

The most immediate danger is from human activities and oil drilling projects in the Arctic region, as well as climatice disturbances which threaten to wipe out floating ice which is its natural resting area, and the progressive disappearance of its prey. 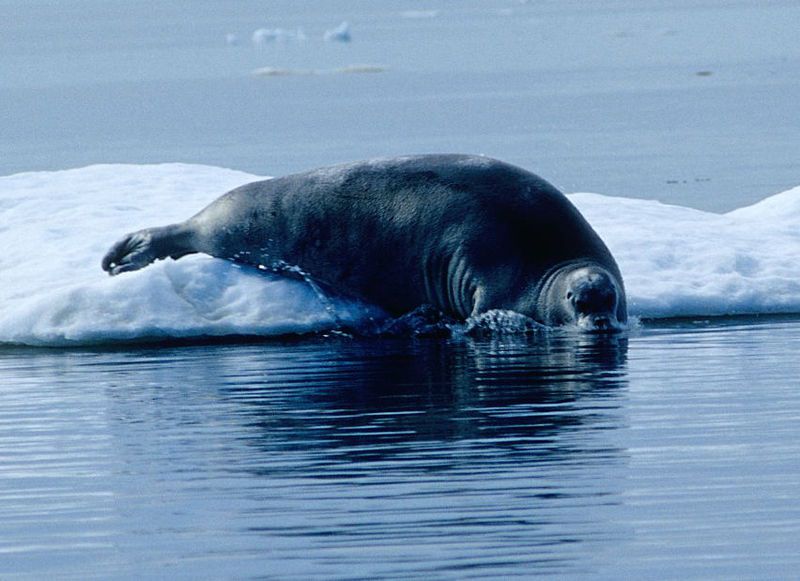