Cirripedia are marine organisms with no compound eyes and antennae. The thorax has six pairs of biramous appendages, cirri, used for respiration and to capture food particles. These six pairs of legs transformed into cirri, form an oval-shaped structure with powerful muscles and brush bristles used to create a food current and direct nutritious particles towards the mouth. The body is housed inside plates that form a low cone, with an opening made mobile by the small plates inserted inside it: the terga and scuta.

Organisms classified as Acrothoracica permanently live in holes formed in the coral. Rhizocephala are parasites of decapod crustaceans and are not found on the beach: the two groups cannot therefore be confused in France.

Closed barnacle. When water covers this crustacean, it closes as soon as it is immersed and remains closed for the entire duration of the tide. © C.König
Reproduction and use prohibited

This is a boreoarctic species commonly found in the intertidal zone. It is hermaphroditic, but its self-fertilisation is considered to be impossible. The fertilisation period takes place (more or less) in late October and fertilised barnacles incubate their eggs in their palleal cavity until eggs are laid in the spring. Barnacles have several plankton stages during which the different nauplius larvae are mobile. When it reaches the adult stage, the barnacle attaches itself to a rock or shell. When it fixes itself to a rock or shell, its body reverses and the animal's ventral side is on the top, which encourages the formation of plates.

At low tide, Thoracica can breathe through a micropyle which maintains contact between the air and the water contained in the shell. If too much evaporation occurs, it may completely close and rely upon anaerobic breathing for a while.

There are different ranges of the species depending on the littoral zones. In France, large species such as Balanus perforatus are found in covered areas under rocks exposed to the wind, where they protect themselves from the force of waves, while smaller species such as Chthamalus stellatus and Semibalanus balanoidestake advantage of the rocks and are able to withstand more exposed places, they must also remain immersed for longer times (permeability of the cuticle, size, capacity to retain water, resistance to desiccation, all sorts of metabolic problems, therefore...). These parameters determine the distribution of barnacles along the coast. 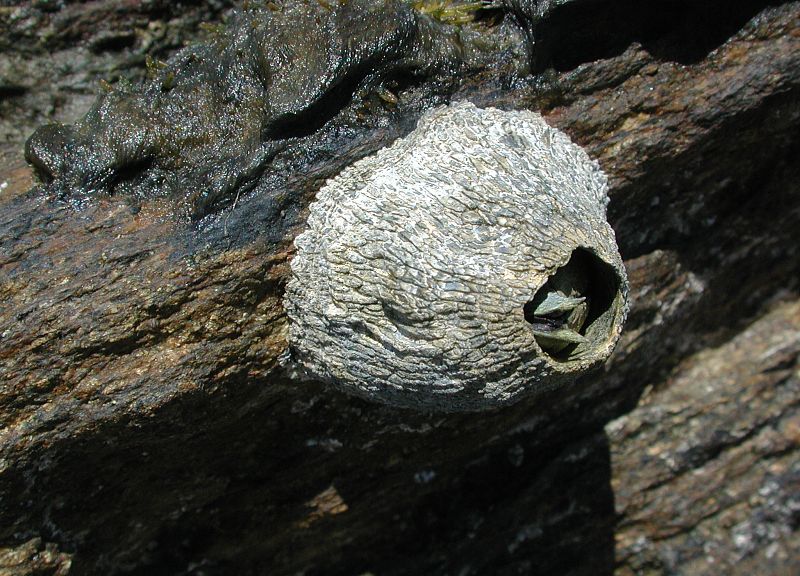