According to the National Red List, the Atlantic salmon is a threatened species in France.

Much like the European sea sturgeon, the Atlantic salmon is an amphihaline migratory fish . It reproduces and its young grow in fresh water, while adults grow in the sea. Originally found throughout the North Atlantic basin, its numbers have dropped drastically or the species has completely disappeared in some French basins (Rhine, Dordogne, Garonne, Seine...) since the mid 19th century. Today, in France, it is mainly found in the Loire, the Adour, the torrential rivers in Bearn, the Nivelle river in the Basque Country and several rivers in Brittany and Normandy.

The species' depletion is essentially caused by the increase of obstacles in migratory pathways. Indeed, dams block access to spawning grounds located further upstream despite the existence of structures such as fish ladders or passes, which are not always effective.

A bioindicator of the water quality of a water course, the Atlantic salmon is also very sensitive to pollution, and changes in water quality are a major cause of its disappearance. The effects of climate change (increased water temperature, decreased food resources...) modify the species' living conditions and strategies and may be a cause of its reduced survival rate.

Legal protection of the Atlantic salmon

For several decades, scientists and many associations have mobilised efforts to address the situation of the salmon. A preservation plan developed by the ONEMA (French National Agency for Water and Aquatic Environments) and restoration programmes are being implemented in several river basins where the species has disappeared or declined (Loire, Garonne-Dordogne, Seine-Normandy...). For several years the species has been making a comeback particularly in the Seine basin. The Atlantic salmon is included in Annexes II and V of the European " Habitat " directive (1992) and can be the subject of protective measures taken by French local authorities using a natural habitat protection order. 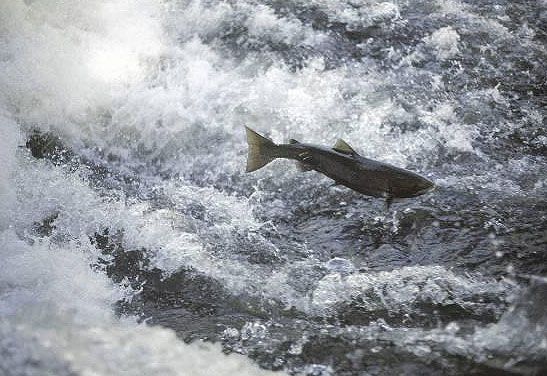