Description of the Asian black bear

The Asian black bear, also called the white-chested bear, has a blackish coat with brown glints and is characterised by a white patch in the form of a crescent (or collar) across its chest. This is why it is also called the moon bear. But not all Asian black bears have it. Its hair is short all over its body except for the shoulders and neck, where it is much longer. This is a small sized animal that easily goes unnoticed in its environment.

Habitat of the Asian black bear

The Asian black bear is found mainly in the Himalayan mountains, but its cousins are found throughout the mountains of Asia from Iran to Pakistan, Afghanistan to Burma, Laos to Tibet, Japan to Taiwan. It lives in the humid and steep mountainous forests at an altitude of between 1,500 and 3,000 metres.

Behaviour of the Asian black bear

Given the environment in which lives, the plantigrade has adapted to the difficulties of the terrain. It has become an excellent climber and climbs rocks as well as trees with a disconcerting ease, given its weight. It frequently sets up a place to sleep in the fork of a tree branch. It has a very well developed hearing, sight and smell. It is an essentially crepuscular and nocturnal animal that sleeps during the day. When the outside temperature is high, it moves to higher altitudes to find the cool it needs. It hibernates in winter in a hollow trunk or a cave.

Reproduction of the Asian black bear

The habits of the Asian black bear are not fully known, and the information we have on its reproduction in the wild is patchy. Depending on the geographic region, it gives birth at different times. It can give birth in October in Pakistan, but not until the following June in colder regions. The female gives birth to one or two cubs every two to three years. Sexual maturity is reached between the third and fourth year.

Diet of the Asian black bear

Like most ursidaes, the Asian black bear is an omnivore but is mainly vegetarian. Its diet depends on the food available and consists of fruit, berries, acorns, roots and tubers, shoots, bamboo, as well as invertebrates and small mammals, or carrion.

Threats to the Asian black bear

The different subspecies of Asian black bears are mainly threatened by the beliefs of certain populations, in the medicinal and aphrodisiac properties (syrups, creams...) of their bile. For example, China has about sixty farms that breed these plantigrades. The bears’ sides are punctured with needles to extract their bile, they are kept in cages for several years before being slaughtered.

In addition to this threat, Asian black bears are also threatened by hunting for traditional food as its paws are considered a delicacy. The animal finds its last refuge at high altitudes, in forests that are difficult to access and not yet exploited by man. In Pakistan and in Iran, the species is classified CR by the IUCN, which means in critical danger of extinction. In countries such as Myanmar, Laos, Cambodia, Thailand...there are no population surveys for this species. On Formosa Island, the local species <3337/>Ursus thibetanis formosanus<3338/> is classified EN: endangered as there are no more than 200 to 300 individuals in the wild. 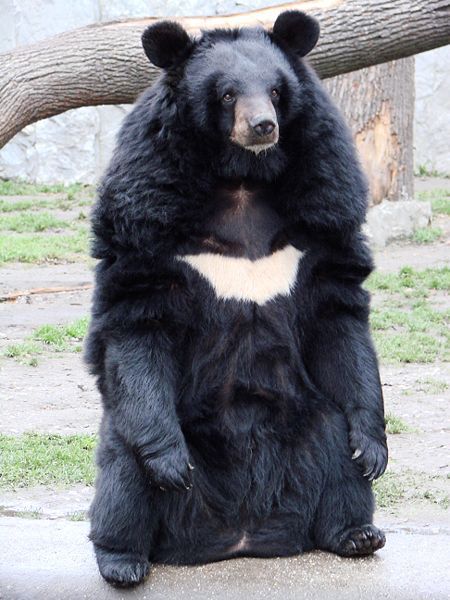