Description of the Arctic fulmar

Although it looks like a gull, the Arctic fulmar is not related to it. Its greyish feathers give it a scaly appearance. The upper part of its body is grey:the tips of its wings are darker while the rump and the tail are lighter. Its head, placed on a short and thick neck, throat and stomach are white. Its yellow and grey beak is hooked and has tubular nostrils. Its eyes are surrounded by a black patch. Its short, webbed feet are located very far back on its body and make it difficult for it to walk on land.

Habitat of the Arctic fulmar

The Arctic fulmar is a pelagic bird that lives in the Northern hemisphere, from the Arctic zone to the temperate regions of Europe, North America and Asia. In Europe, its populations are concentrated around the British Isles, Svalbard, Greenland and Iceland. During the nesting season it lives on the coastal cliffs and the rocky shores of the Atlantic and North Pacific. The Arctic fulmar is divided into three subspecies:

Behaviour of the Arctic fulmar

The Arctic fulmar is a social and gregarious bird that lives in large groups and frequently mixes with other species. Its vocalisations are quite short and sound like raucous cackling. It is an excellent glider that uses the air currents to travel, but also beats its wings to fly gracefully, often at wave level. It is a migratory bird whose Nordic populations fly south between November and February. When the bird feels threatened it can spit a yellow, oily and nauseating substance at an intruder.This substance is usually used to feed its young when they are just a few days old. The Arctic fulmar also has glands that allow it to desalinate the sea water it drinks.

Reproduction of the Arctic fulmar

The Arctic fulmar nests between April and June in the hollows of rocks along cliffs. The female only lays one egg, which both parents brood for a period of between 50 and 57 days. After the egg hatches, the chick is kept warm by its parents and fed with an oily secretion regurgitated by the parents before it begins to feed on predigested fish. The young bird takes flight after seven weeks and reaches sexual maturity between nine and ten years.

Diet of the Arctic fulmar

Pelagic, the Arctic fulmar mainly feeds on fish, crustaceans such as krill, cephalopods, and also jellyfish.

Threats to the Arctic fulmar

The Arctic fulmar is often a victim of plastic waste that it ingests believing it to be jellyfish, and is also sensitive to hydrocarbon pollution (black tides, degassing...). However, the growth of North Atlantic populations and its wide range have confirmed that its numbers are stable and the species is not endangered. 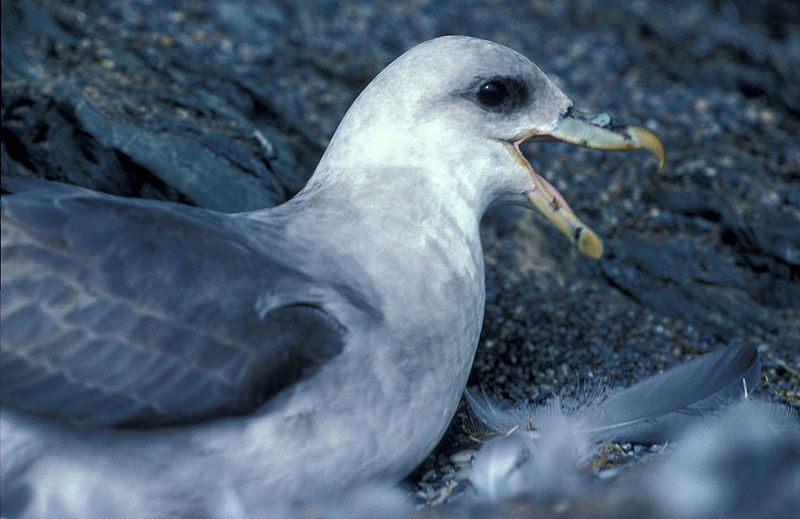