According to the French national red list, the apron is a threatened species in France.

The decline of this species has many identified causes. The fragmentation of its natural habitats linked to the significant development of the Rhone basin (channelization, creation of dams...) has caused a major reproductive isolation of populations leading to a gradual loss of genetic diversity. The presence of dams blocks the travel of reproductive fish to spawning areas making the colonisation of sectors located upstream of the dams becomes impossible. Water pollution and dammage to the riverbed of the watercourses in the areas where it lives also contribute to the deterioration of the habitat and the disappearance of the apron.

Protection of the apron

Given the apron's situation, many conservation and habitat restoration efforts have been launched. In addition to the legal protection measures in support of the species, two European LIFE Nature programmes (1998 - 2001 and 2004 - 2009) have made it possible to develop and implement a conservation strategy.

Much research and careful monitoring of known populations have helped improve knowledge of the species. At the same time, different structures have been fitted with adapted fish passes and conclusive artificial reproduction tests have made it possible to carry out pilot reintroduction operations. 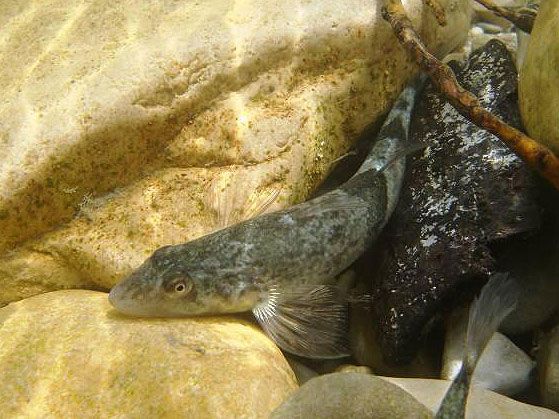