Aposematism is all of the mechanisms used by animals to send signals to possible predators to let them know that they are not edible.

The signal can be a sound, a chemical or visual. Frogs in the Dendrobatidae family are easily recognised by their bright colours and are highly toxic.

The animal emitting this signal can be toxic or non-toxic to its predator. If it is indeed a non-toxic organism, this is called mimicry -the animal adopts the behaviour or appearance of a toxic species -this is called Batesian mimicry, after the British naturalist Henry Walter Bates, who first described this strategy. 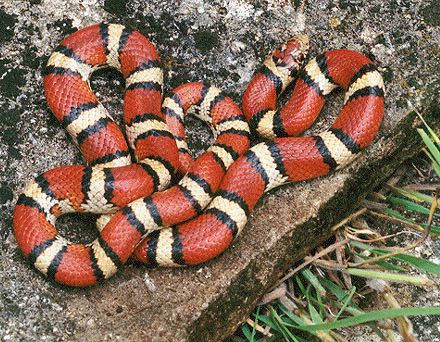 The false coral snake, which lives in America, looks like the coral snake and therefore uses aposematism. © BillC, Wikipedia, cc by sa 3.0