Description of the bullfrog

The bullfrog is the largest amphibian in France. Its back varies from olive green to brown, and is speckled with darker patches. Its abdomen is cream and speckled with grey spots. The throat is yellowish and the diameter of the tympanum is twice as large as that of its eye.

The bullfrog may be confused with the green frog, especially during the juvenile stage: these two species are compared in the table below.

Differences between the bullfrog and the green frog. © DR

Originally from North America, from which it was imported, the amphibian is currently also found in Western Europe as well as in China. This species is not very demanding with regard to the quality of its environment, which must, however, be some sort of aquatic environment: lakes, ponds, wet ditches...

The bullfrog was intentionally introduced to several parts of the world for different reasons:

In 1968 a few individuals were brought back from the United States by someone who owned property in Gironde. Since then, the bullfrog has become a serious threat in Gironde and Dordogne. The Savoie and Loir-et-Cher regions are also areas where the species has settled. It started as a coloniser, occupying areas disturbed by humans. Then, it went on to occupy all of the adjacent wetlands: the risk to native species has become critical.

During mating season males have aggressive and territorial behaviours. A male's territory can cover several dozen metres of banks. The animal hibernates in autumn. To hibernate it digs an underground cavity from which it will only emerge when the air temperature reaches about twenty degrees.

The amphibian is an opportunistic predator that feeds on any type of prey that it can catch. It lies in wait for prey both day and night. Frogs, small fish and crayfish are generally on its menu, but it can also eat waterbird chicks.

The mating season is in March and April. The male with the loudest call wins the right to the female that it covets. The eggs are fertilised as they are laid. Each clutch - there can be two per year - releases between 3,000 and 24,000 eggs. Tadpoles only undergo metamorphosis after two or three years, and sexual maturity is reached between two and four years following the transformation of the larva.

The call of the bullfrog is deep and resonant, reminiscent of the bellow of the bull from which it gets its name.

Different techniques are used: either the eggs are taken from the natural environment, or terrariums are used for mating after adults have been captured. Bullfrogs can be raised in a semi-dry or dry environment. When the frogs are "ready", they are killed and processed. Their legs are frozen to ensure their freshness as they are exported for human consumption. Live frogs are shipped by plane at low temperatures and their survival rate exceeds 99% if the trip does not last longer than 72 hours.

Breeding, which was very limited until the 1990s, has reached about 2,000 t/year (¾ of which in Taiwan). Asians are the biggest consumers, especially those living in America, where there is a demand for both live frogs and frozen legs.

The animal is an invasive exotic species which was imported for breeding and human consumption, as a pet and a natural insect control agent. Since then its presence has seriously disturbed natural equilibriums and constitutes a direct threat for the other amphibious species that share its territory. The absence of true predators and a high survival rate of its larva allow it to continue to proliferate undisturbed.

Currently in an expansion phase, its population extends by 5 km per year, perhaps faster in France due to the climate and lack of predators, leading to direct and indirect consequences :

Obviously, it should only be eradicated by the appropriate agents. In the event of an encounter with a "suspect individual", alert the authorities, either the regional environmental committee or the drainage basin maintenance service, such as, for example, the Cistude Nature association. In any case, do not directly tamper with batracian populations. Follow the principle of precaution: any intervention or modification of a body of water in contaminated areas must be carried out carefully due to the risk of neighbouring sites being infested. If a body of water is drained, notify the authorities to perform the drainage with grates suitable to prevent propagation. 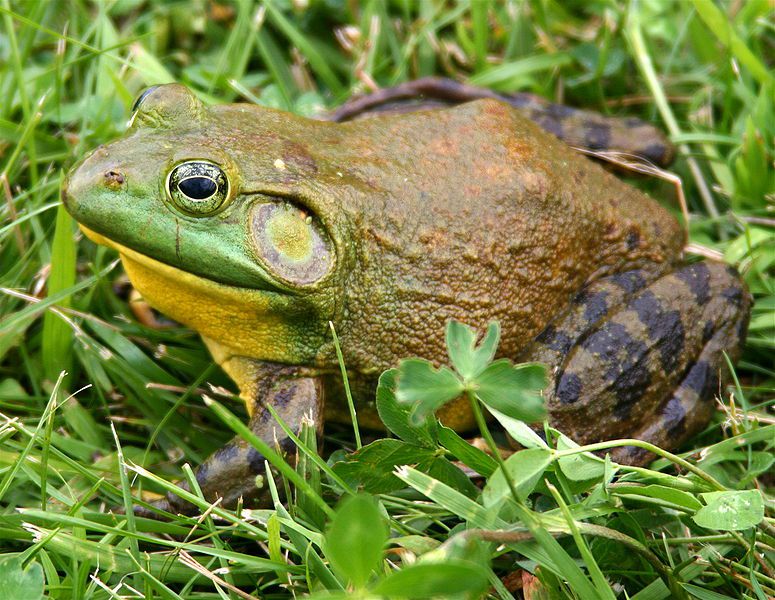