On 28 May 2006, in the province of Sidoarjo in Java (Indonesia), the Lapindo Brantas company was drilling the sub-soil for natural gas when an eruption of hot mud and gas occurred nearby.

Consequences of the mud eruption

The newly-born mud volcano then spewed out uninterrupted streams of mud mixed with gas, covering the surrounding land and villages. Several tens of thousands of people were evacuated.

In 2008, the volcano named Lusi, for Lumpur Sidoarjo (mud of Sidoarjo in Indonesian), was still spewing out more than 100,000 cubic metres of mud a day, and it did this continuously until 2010.

It has not been possible to plug the volcano. The mud, loaded with heavy metals and hydrocarbons, has been channelled by dykes into a river. The bed of this river is gradually filling up and the aquatic ecosystem is contaminated, as are the fishery resources (fish, shrimp).

The assumed causes of the mud volcano

There are two theories to explain the origin of this mud volcano. The first, which was the one that was accepted during the litigation, is based on an earthquake that occurred two days before in this region known to be the site of old mud volcanoes. The earthquake of a magnitude of 6.3 on the Richter scale is assumed to have affected the stability of the area which was already very geologically active.

The other theory, favoured by foreign specialists, blamed the drilling. A British study in 2010 confirmed the latter hypothesis and pointed out several errors: an under-estimate of the pressure on the site, the absence of protective measures, the removal of the drill string, etc. 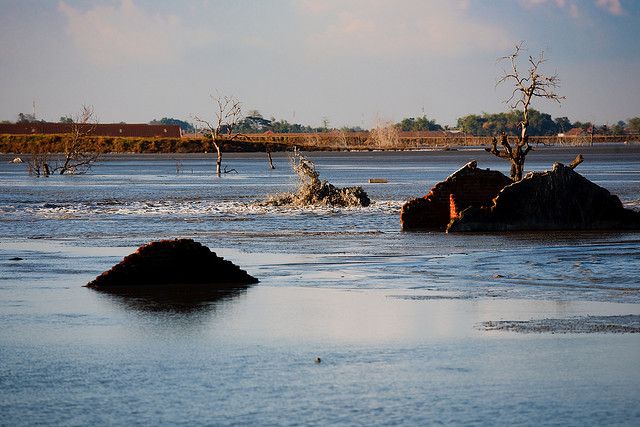 The Sidoarjo mud volcano and the sea of stinking mud surrounding it covering 640 hectares of fields and villages. © Joshua Sosrosaputro CC by-nc-nd 2.0