Etna is the most active volcano in Europe, and one of the most active in the world. From its summit at 3350 metres it overlooks the eastern coast of Sicily and the town of Catania. It is composed of several superimposed volcanic structures, covering a total area of 1250 square kilometres, and its perimeter measures about 200 kilometres.

Its last eruption was in September and October 2004, but its last major eruption was in 2002. 200 earthquakes were felt in the region at that time, one of them reaching 4.2 on the Richter scale. A lava flow partially destroyed Piano Provenzana 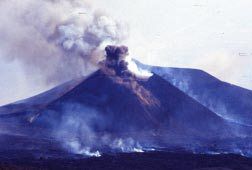