Voyager 2 was launched on 20 August 1977 followed by Voyager 1 sixteen days later. Today these probes have left the solar system. Voyager 1 overtook Pioneer 10 to become the most remote terrestrial object.

After leaving Earth in 1977 the Voyager probes arrived at Jupiter in 1979 and Saturn in 1980. Only Voyager 2 continued on to Uranus, arriving in 1986, and Neptune, in 1989. The Voyager probe missions sent back the most extraordinary information about the giant planets and their satellites. New, hitherto unimagined worlds were opened up to human exploration.

On arriving in the Jovian system, the Voyager probes started harvesting data. They discovered:

-a ring around Jupiter;
-the movements of Jupiter's upper atmosphere;
-aurorae borealis above Jupiter;
-storms with giant lightning flashes;
-very active volcanoes on the satellite Io;
-the nature of the ice on the satellite Europa.

The most important discoveries of the Voyager probes in the Saturn system were about the rings, which were more numerous than was thought (nearly one thousand new rings were discovered) some of which were very tenuous, "shepherded" by small satellites that confine their material using their gravitational influence.

The planet Uranus remains mysterious: the Voyager 2 probe showed us a uniformly coloured planet, unlike the other giant planets.

The planet Neptune, so far away that very little was known about it, revealed the structure of its clouds and its dark spot. 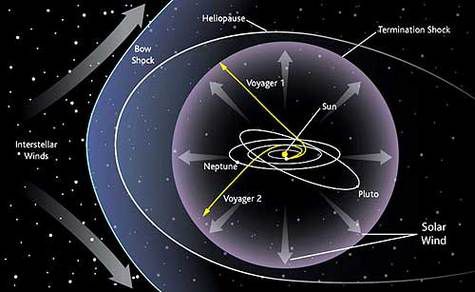