The asteroid Vesta was discovered on 29 March 1807 by the German astronomer Heinrich Olbers who, 5 years earlier, had discovered Pallas. After Ceres in 1801 and Juno, Vesta became the fourth member of the asteroid belt encountered between Mars and Jupiter. With an average diameter of 500 kilometres, Vesta alone represents 9% of the total mass of the asteroid belt.

The American probe Dawn visited Vesta in 2011, orbiting at first 2750 kilometres above the asteroid and then at 250 kilometres. Images were sent back giving detailed knowledge of this strange asteroid. Many scientists are intrigued by Vesta. Spectroscopic measurements of its surface indicate that, like the Moon, it is mainly composed of pyroxene. But unlike our satellite, the abrasive action of the solar wind seems not to have occurred on Vesta; researchers theorised that the asteroid could have a magnetic field protecting it from solar ions. Vesta has a metallic core, and the remains of an ancient magnetic field have been discovered.

Another singularity is the relief of Vesta: mapping by the Hubble telescope revealed a dozen hills and a gigantic crater 460 kilometres in diameter with a central peak 18 kilometres in altitude. The impact that caused this crater threw a multitude of fragments into space some of which ended their trajectory on Earth in the form of meteorites after their very long journey. 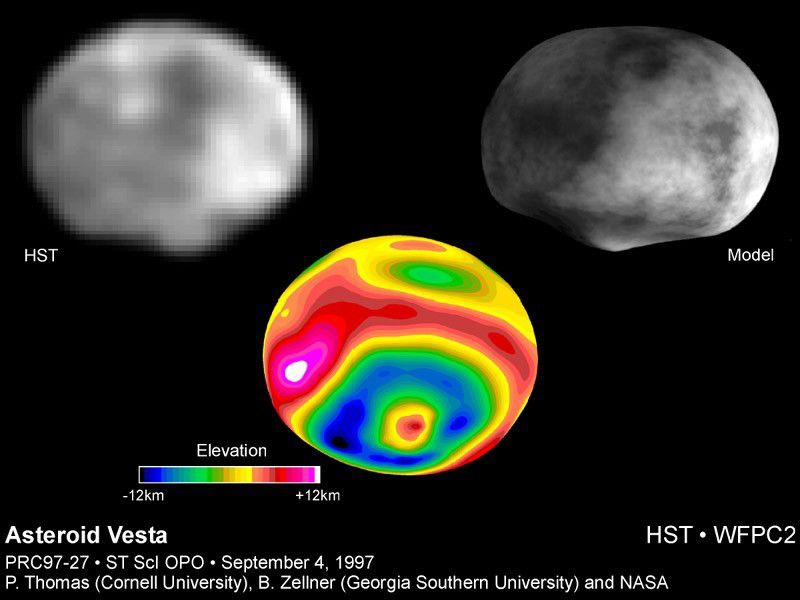 The asteroid Vesta seen by the Hubble telescope in 1996 on the left, its model on the right, and the topological false colour map below. The gigantic crater from a collision with another asteroid can be seen clearly together with its central peak. Credits: NASA / B. Zellner / P. Thomas