The Venus Express probe, successfully launched on 9 November 2005 from the Baikonur cosmodrome in Kazakhstan, has the mission of studying the atmosphere, the surface and the plasma of the planet Venus.

To keep costs to a minimum, the probe was built around the platform developed for Mars Express by the same industrial teams as for the design of the Mars probe. Venus Express uses "spares" of the instruments built for the Mars Express and Rosetta probes. They were optimised to the specific requirements of the mission.

Venus is often compared with earth by its size and its mass. However, the two planets evolved differently. The surface of Venus is dry and extremely hot (over 400°C). Its landscape is mainly one of vast plains, scattered with impact craters and numerous volcanic features.

Like Mars Express, the launcher used was a standard Soyuz to which an extra Fregat stage had been added. The probe was sent on a direct trajectory for a 150-day journey. On arrival, the probe was put into a 5-day elliptical orbit before going into its final orbit (quasi polar, 250 x 66,000 km), initially for two Venusian years, equivalent to 500 terrestrial days. 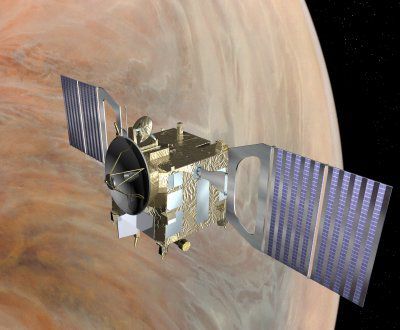