The Venus Entry Probe (VEP), is a probe to Venus. Its development is complex and it has exciting scientific objectives. The aim is to send it to Venus to find solutions to the Earth's greenhouse effect problem. In the face of climate change on Earth, scientists want to understand what is happening elsewhere in the solar system. Venus is described by some as the Earth's twin sister, with some great similarities to our planet. Its dense hot atmosphere with several layers of thick clouds causes a major greenhouse effect.

The main objectives of the Venus Entry Probe:
- the origin and evolution of Venus's atmosphere since its formation
- the physical and chemical composition of the lower atmosphere
- the composition and chemistry of the particles forming the cloud cover
- the dynamics of its atmosphere

This mission will consist of two orbiters (Venus Polar Orbiter and Venus Elliptical Orbiter), a balloon and 15 microprobes.

Venus Aerobot will use Venus's atmosphere and a parachute to brake its descent to release the balloon which should settle at an altitude of about 55 km where the environment is less extreme than in other regions of the atmosphere. The temperature there is 30° and the pressure is 0.5 bars; the scientific interest of this region is as significant as elsewhere. The initial objectives are for the balloon to make two orbits of the planet, taking about 14 terrestrial days. Suffice it to say that the release and strict control of the balloon's gas volumes are required.

The 15 microprobes fixed to the balloon will be used as ballast. During flight, they will be deployed in the atmosphere over 5 distinct regions. They each weigh about 100g and contain small payloads to determine the vertical profile properties of the lower atmosphere.

Several technological challenges have been identified for each phase of the mission. For example, the development of a shield that will be able to withstand direct entry into the very dense Venusian atmosphere. For the balloon, the main challenges are its envelope, gas storage and electricity generation. The balloon's service life will depend on how well its envelope keeps gas loss to a minimum. Welded seams will almost certainly be necessary. Although a pressurised gas tank has proved its feasibility, new technology will be needed. One idea is cold gas generators, and anything that can be done to reduce the overall weight and volume.

Electricity supply is also a problem. The use of solar batteries appears to have constraints and new solutions are being sought. Another approach is to develop instruments and sub-assemblies that are less energy consuming.

Among preoccupations with the microprobes are the design of these little devices and the localisation and communication system. And finally because of their small size, integrating the sub-assemblies and payloads promises to be difficult. 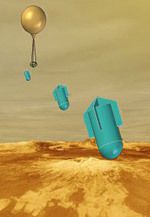 Artist's impression of the VEP balloon releasing its microprobes