The second planet from the Sun, Venus travels in a nearly circular orbit with a mean radius of 108 million kilometres. Because of this, Venus receives solar radiation almost twice as intense as Earth; its sidereal period of revolution is 224.7 days. Paradoxically, the planet rotates on its axis extremely slowly (243 terrestrial days) and does so in a retrograde direction. The circularity of the orbit and a very small orbital inclination mean that there are no marked seasonal effects.

Because of its size and mass, Venus is often considered to be comparable to Earth. Its mean density (5.25) indicates that Venus, like Earth, is composed of silicate rocks and be a differentiated planet. Venus probably has an iron core with a radius of 2900 kilometres; the absence of a magnetic field suggests that it is solid.

This core may be surrounded by a silicate mantle with sufficiently hot outer layers to cause partial melting of the materials, down to a great depth. Its crust is probably composed of silicates of density 2.8 (basalt) with concentrations of radioactive elements, from the petrochemical analyses carried out on the surface by Soviet probes (Venera 13 and Venera 14 in 1982), and with a thickness estimated at between 10 and 30 kilometres, determined from models of tectonic deformation and models of viscous relaxation of reliefs. Its elastic lithosphere may have a thickness comparable to that of Earth, 35 kilometres. Such a model of the internal structure would be compatible with the hypothesis of volcanic activity associated with some tectonic activity.

The surface of Venus photographed by the Soviet probe Venera 13 in 1982.

Because of the opacity of the atmosphere, observation of the surface of Venus can only be achieved using radar (terrestrial or on board space probes).

Radar imaging has shown that Venus's surface has quite a large morphological diversity resulting both from a volcanic history and complex tectonics. Because of the small number of impact craters scattered uniformly over the surface, the average age of the Venusian crust is estimated at about 500 million years. The tectonic structures resulting from extensive crust deformation and/or compression have linear (chains of wrinkles and fractures), arched (mountain chains) and circular (coronae) morphologies. They affect the entire surface, and are distributed in a mosaic of large structures about a hundred kilometres in size separating rigid blocks of similar dimensions. These volcanic and tectonic phenomena indicate that the internal dynamics of Venus are shown on the surface differently compared to Earth, characterised by plate tectonics.

The atmosphere of Venus is hot and dense: the pressure at ground level is of the order of a hundred times the pressure on Earth (9.5 MPa), and the temperature is very high (460°C). Carbon dioxide CO2 (96.5 %) and nitrogen N2 (3.5 %) are the only two gases making up 99.9% of the atmosphere. The high surface temperature is not due to the closeness of Venus to the Sun, but to a powerful greenhouse effect, with the atmosphere screening infrared thermal radiation from the ground. The high pressure is due to the intense degassing of rocks at high temperature. Sulphur compounds are present in the atmosphere, in the form of sulphur dioxide SO2 (0.015%) and perhaps hydrogen sulphide H2S and carbon oxysulphide COS, feeding the thick clouds at between 50 and 70 kilometres altitude, mainly composed of droplets of sulphuric acid, H2S04. The cloud layer covers the planet uniformly, hiding the surface, and only 5% of sunlight reaches the ground.

From the density of the impact craters recorded, Venus has a relatively young surface about 0.5 billion years old. The surface appears not to have been modified by erosion as it has on Earth, but seems to have been profoundly reshaped by volcanism and tectonics. The great variety of tectonic phenomena and the geographical distribution of tectonic activity seem to indicate that regional deformation (compression and extension) together with vertical and horizontal movements have played a key role in the geological evolution of the planet. However, the global mechanisms behind these deformations and movements are not yet understood, nor are the relations that may exist between these mechanisms and volcanic activity. 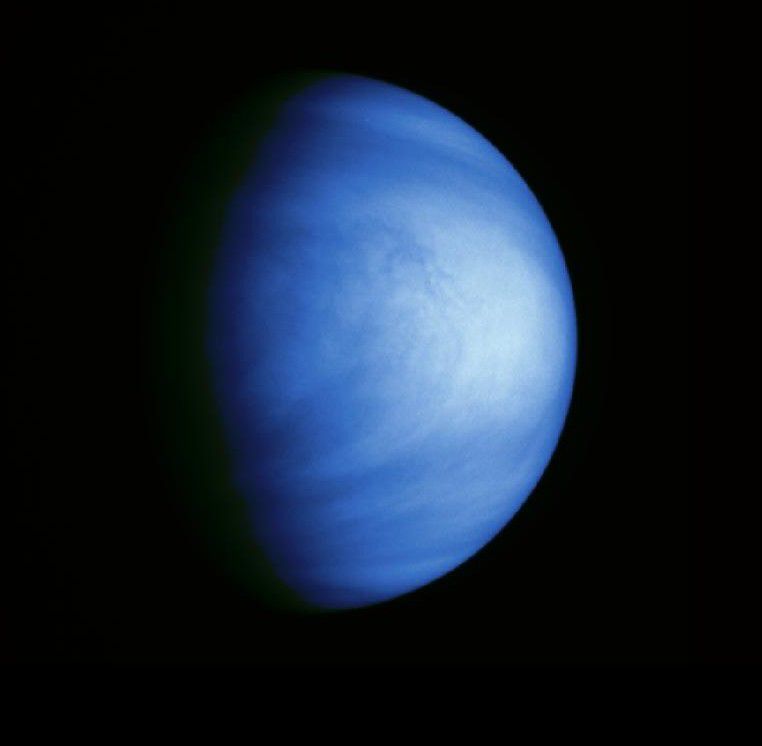 Venus seen by the European probe Galileo in 1990.