Uranus has a magnitude of the order of 6, is twice as far away as Saturn and two and a half times smaller; it is at the limit of visibility to the naked eye. An experienced observer can, however, see it on a clear night; it looks like a very weak star. Uranus was unknown to the Ancients, for whom Saturn marked the limit of the solar system. It was only discovered on 13 March 1781 by the musician and amateur astronomer William Herschel who came accross it by chance when observing the constellation of Gemini using a 16 centimetre telescope and noticed an object that was not just a dot like a star. He thought he had discovered a new comet, but a calculation of its orbit quickly showed that the object was in fact a planet with a circular orbit at more than 3 billion kilometres from the Sun.

And yet Uranus had unknowingly been marked several times on maps of the sky between 1690 and 1780, which was subsequently very useful for calculating its orbital parameters. Uranus is seen from the Earth with an angle of 4 arc-seconds. So even with the biggest telescopes, its disk appears as a small bluish-green spot on which no details can be seen. Since 1994, however, the Hubble space telescope has been obtaining detailed images on which the main features of its atmosphere can be seen.

Uranus has a diameter four times that of the Earth and is fifteen times more massive. Like the other giant planets, Uranus is composed of 99% hydrogen and helium. Like Jupiter and Saturn, it has a complete system of regular satellites. Like Jupiter, Saturn and Neptune, it has a ring system. It rotates in 17 hours and 14 minutes. But unlike the other planets, Uranus's axis of rotation is practically in its orbital plane; the equatorial plane of Uranus and the orbital plane of its known satellites are almost perpendicular to the plane of its orbit around the Sun.

The discovery of Uranus by space probes

On 24 January 1986, Voyager-2 flew past Uranus. What for two hundred years had been just a small dot of bluish light turned out, in the space of a few hours, to be a particularly rich world with a surprising set of rings and satellites which were much more active than predicted, especially the surprising Miranda.

The essential of what is known about the Uranus system came from this brief encounter; it should, however, be noted that the measurements made from the Earth perfectly complement those of Voyager-2. For example, a study of the rings from our planet by observing stellar occultations made it possible to obtain information about their structure that the probe could not have obtained. On the other hand, the small particles in the rings detected by the probe are invisible from the Earth.

Seven thousand images of the Uranus system, two thousand of which were taken at the moment of closest approach, thousands of infrared and ultraviolet spectra and millions of radio and magnetic measurements were sent to Earth.

The atmosphere of Uranus

The images showed that there are clouds, bands parallel to the equator and layers of mist. In particular, the pole which is currently facing the Sun is covered with a cap of mist. The cloud movement made it possible to measure the rotation period of the Uranian atmposphere. Uranus's atmosphere turns anticlockwise and faster than the interior of the planet; all the winds blow from the west. The upper atmosphere of Uranus rotates differentially. Unlike what happens on Saturn, the rotation is faster towards the poles than towards the equator: the period is 17 hours at around 25 degrees latitude and 16 hours at around 40 degrees latitude.

From infrared spectra and the occultation of radio waves by the atmosphere, the abundance of helium has been estimated at about 15%, the same as in the Sun. Apparently the atmosphere, which has the same composition as the Sun and the primitive nebula, is primordial and not the result of a later evolution of the planet.

The internal structure of Uranus is very different from that of Jupiter and Saturn. At its centre, the temperature is probably of the order of 7000 kelvins, and the pressure around twenty million times the atmospheric pressure on Earth. Going out from the centre, there are probably successively a hot, solid or liquid "rocky" core with a radius of around 7500 kilometres essentially composed of silicates and iron, then a mantle over 10,000 kilometres thick composed of frozen water, methane and ammonia, and finally a thick envelope of gaseous hydrogen and helium forming the atmosphere that can be observed from the Earth. This envelope has about four times the mass of the earth.

The Uranian magnetic field and magnetosphere

Before the encounter with Voyager-2, nothing was known about Uranus' magnetic field: the radio frequency radiation of Jupiter is easily detectable from the Earth; Saturn's had been observed by the Voyager probes at a considerable distance over a year before the encounters; but in the case of Uranus, the veil was only lifted at the last moment, a few hours before the probe's closest approach. One of the big surprises in the Voyager-2 mission was the discovery that the magnetic field axis was not more or less aligned with the axis of rotation of the planet, but was on the contrary strongly inclined by about 60 degrees. The magnetic field is intrinsically fifty times stronger than the Earth's; given the size of Uranus, this corresponds to a slightly lower intensity on the "surface". This magnetic field is probably generated by a dynamo effect within the thick liquid mantle containing many ionised atoms. The existence of this strong magnetic field and the interaction with the solar wind create regions analogous to the Van Allen belts around the Earth. 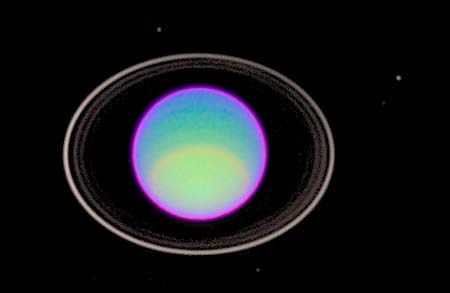 The planet Uranus with its rings, invisible from Earth.